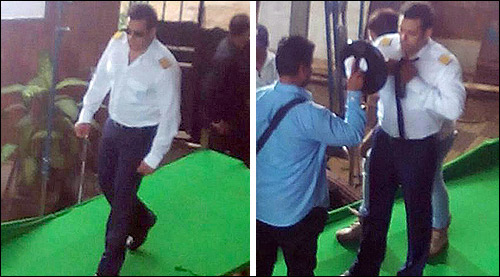 The controversial reality show Bigg Boss is all set to be back with its new season! While many names are being tossed around as contestants for the eighth season of the show, there were also rumours that Salman Khan may not host the show. However, clearing all these rumours, Salman Khan was recently spotted shooting for the new promo of Bigg Boss 8.

Salman Khan has been shooting with filmmaker Rohit Shetty for the first time. For this new promo, Salman is seen sporting the attire of a pilot and a picture of his new avatar was posted on Twitter by his fans during the shoot. We also hear that the promo for this season will be unique and grand and we'll get to see some action sequences too. Hence, it is being said that the master of Bollywood style action Rohit Shetty has been roped in to direct the promos.


On the Bollywood front, Rohit Shetty is currently riding high on the success of the Ajay Devgn starrer Singham Returns and will soon move on to his next. Salman Khan, on the other hand, is shooting for Sooraj Barjatya's Prem Ratan Dhan Payo and will soon join hands with Kabir Khan for Bajrangi Bhaijaan.