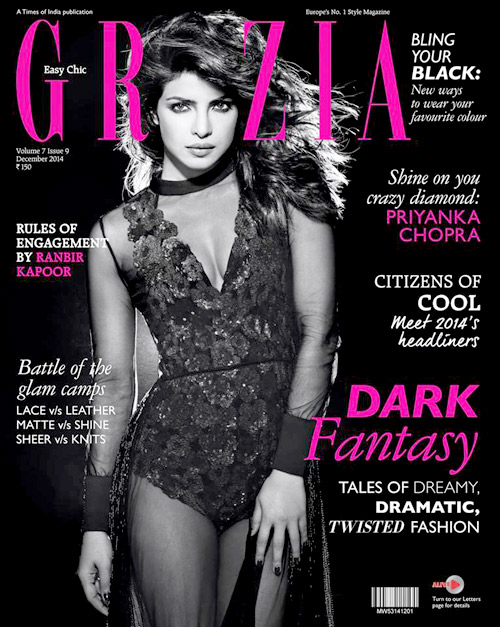 Priyanka Chopra, who was last seen in hard-hitting film Mary Kom that was based on the life of Indian pugilist, has been receiving a lot of praise and appreciation for her portrayal of the character ever since. While currently the actress is working on two films namely Zoya Akhtar's Dil Dhadakne Do and Sanjay Leela Bhansali's Bajirao Mastani, the leggy beauty took time out to shoot for the latest issue of fashion magazine Grazia.


Posing as the magazine's cover girl for the month of December, Priyanka Chopra heats things up in a black lacy sheer bodysuit with intricate embroidery designed by Namrata Joshipura. Apart from the cover, the magazine also features Priyanka as its centerfold attraction with an article titled 'Shine on you crazy diamond'.


Besides Priyanka Chopra, the latest issue also features articles on rules of engagement by Ranbir Kapoor, new ways to bling up your black wardrobe, an introduction to 2014's headliners and more.