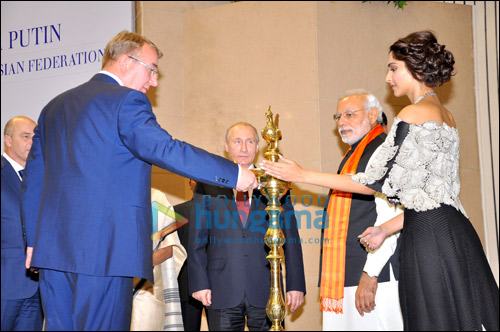 Known as one of the most popular fashion icons, Sonam Kapoor has time and again won awards for her impeccable public appearances. While she has been active when it comes to attending events and hosting charity shows, this time around the actress got an opportunity to share the stage with the Honorable Prime Minister of India, Narendra Modi at a recent conference held in the capital.

The Gem & Jewellery Export Promotion Council (GJEPC), the apex body of gems and jewellery trade in India, in association with the Ministry of Commerce and Industry, GOI and World Diamond Mark Foundation (WDMF) organized the first ever-global congregation of Diamond leaders in India at the World Diamond Conference recently at Vigyan Bhawan, New Delhi.

Sonam Kapoor joined Narendra Modi, and H.E. Vladimir Putin, President of Russian Federation at the Gems & Jewellery World Diamond Conference which is said to be a highly momentous and magnanimous conclave in the diamond industry worldwide.

Sonam Kapoor who was announced the Brand Ambassador of the Council welcomed dignitaries present as they addressed the audience at the conference. Speakers included Minister of State for Commerce & Industry, Ms. Nirmala Sitharaman, H. E. Vladimir Putin, and Shri Narendra Modi.