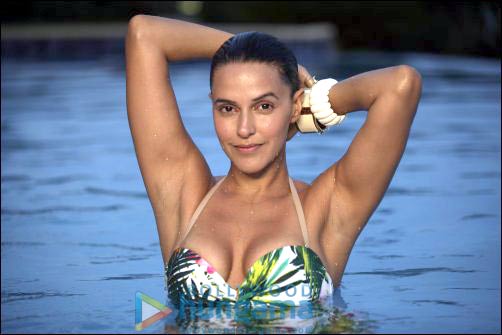 Former beauty queen Neha Dhupia has made several public appearances that have often gained attention, courtesy her unique sense of fashion. And this time we will get to see the actress in a trendy bikini in one of her upcoming releases.

Neha Dhupia was seen doing a pool scene in a floral bikini whilst shooting for her upcoming film Santa Banta Pvt Ltd. In fact, we also hear that the actress has styled herself for this particular sequence. Neha decided to go bikini shopping at Fiji for the scene and was accompanied with the stylist of the film. She roamed for a few hours in the Fiji market and hunted for the right bikini. It is also being said that the actress liked the bikini so much that it is now added to her personal collection.