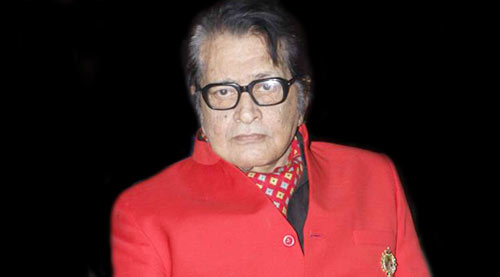 Dadasaheb Phalke award winner 2015, Manoj Kumar aka Hari Krishan Goswami, is no ordinary talent. Just as any art form is about both the content and the packaging, Manoj Kumar

too has the content (the patriotic Indian within him) and the packaging (his skills in cinema) mixed in perfect proportions.

Yes, there are two standout parts of Manoj Kumar's persona-the patriot and the cinematic visionary who can, besides acting, write, produce, direct and edit and take up every responsibility of

making a great and successful film-from his own contribution to the cinematographic interpretation, the music and the performances of his co-artistes.

Manoj mostly stars in his own films. But, being wisely aware of his limitations as an average but dedicated actor, he always ensures that his films have standout characters that remain in our

Even in his directorial swan song Jai Hind in 1999 (though he promises to be back as a director) that was a disaster, Manoj ensured at least two special songs-'Padosan Pakdi Gayi' and

'Aaj Ki Raat', songs that were visually strong as well.


Shor, in particular, was his true masterpiece as a filmmaker, and his only film without a patriotic angle. His story was devastatingly simple: a factory worker does everything possible to

restore the voice of his son, which was lost in an accident that also killed his wife. Finally, he collects the money for the operation that makes his son speak, but in the excitement of the

successful surgery, he falls in his factory before he meets his son, and loses his hearing.

Manoj Kumar's screenplay and his amazingly natural dialogues were the highlights of this real, gritty film, and in true Manoj style, the movie was laced with fabulous lyrics and music ('Ek Pyar

The craftsman within Manoj Kumar was all the more distinctive considering the fact that Manoj decided to be a filmmaker almost by default, as also a writer. He openly confessed that his

visualization of songs followed the Guru Dutt pattern of highlighting the emotions with the perfect cinematographic frames and the correct editing. Add his flair for recognizing deep melody and

strong poetry, and we had a recipe for exquisite music.

Character artiste Pran, for example, recalls being shocked when Manoj not only gave him a gray role in Shaheed (Manoj said, "Pran-saab's was the only fictional character I added to

the film to heighten the impact. He played a criminal who admires our freedom fighters who are with him in jail") and Upkar ("He cast me in a positive role and also told me that I had to

The impact of his films was also because the three essential stools on which any film sits-writing, direction and editing-were handled by Manoj himself, after his first three films, Shaheed,

Upkar and Purab Aur Pacchim, whose editing he entrusted to ace editor B.S. Glaad. And Manoj provided the key to his expertise with the remark, "Direction is that which is not on paper!

As a director, I would look at my scripts with the perspective of the audio-visual impact on the audience and would be ruthless with the writer in me. As editor, I would be similarly merciless with

the director, chopping off his best scenes if they did not add to the totality of the impact."

Manoj's writing tryst began during his struggle phase as actor when he would "professionally ghost-write three or four scenes for different films and would be paid Rs. 11 per scene!" Fascinated by

the character of Bhagat Singh, he had written an entire script on him that his secretary insisted on producing.

While the film was in the making, Manoj wrote most of the dialogues for his own Woh Kaun Thi? as he had suggested replacements to the original writing on location and producer N.N. Sippy and

director Raj Khosla had been impressed. Finally, when the Shaheed director, S. Ram Sharma, expressed his inability to handle some sections of the film, Manoj took over.

"This is where I found that direction was the real and most creative aspect of cinema!' revealed the actor. "So, when Shaheed won a National award and Prime Minister Lal Bahadur Shastri

suggested that I make a film on his slogan 'Jai Jawaan Jai Kisan', I wrote a script on the 24 hour train journey back to Mumbai and decided to direct it myself!' That was Upkar!

This was the film that gave Manoj the image of Bharat, Mr. Bharat or Bharat Kumar that still endures. "I gave my hero the name Ram as the ideal son," smiles the actor. "But because he was a farmer,

and the real India lives in the villages, I renamed him Bharat." And the name and image stuck in all his subsequent directorials!

devotion "that just flowed out of me"-the hit songs 'Sainath Tere Hazaaron Haath' and 'Sai Baba Bolo', which led to Manoj's self-discovery of a songwriter within him as well.

And yet, Manoj affirms that whatever emotions touched and moved the audience in his films were "exclusively" (his words) because of his family trauma during Partition and the two years of living in

Delhi as refugees. Born in a small village called Jandyala Sher Khan (now in Pakistan), Manoj saw at first hand the pain of Partition. "Even my schooling was discontinued for 2 years. My approach

to characterization is a by-product of all these memories,' he says.

Unknown to Manoj, and helped by Destiny, the patriot and visionary within him were set to meet and boost each other long before Shaheed and Upkar. It was at the premiere of Shammi

Kapoor's Tangewali, made by cousin Lekhraj Bhakri, and held in New Delhi on Republic Day, January 26, 1956, that Bhakri found him good-looking enough to be in films and Manoj Kumar told him

to make him an actor!

And when Bhakri gave Manoj his first cameo in his next film Fashion (1957), he got linked with patriotism again, as his appearance was restricted to singing on screen the song, 'Maati Ko

The die had been cast, a full decade before Upkar consolidated Manoj Kumar as Bharat, leading him to quip on the Phalke win that Bharat sarkar (the Indian government) had recognized the