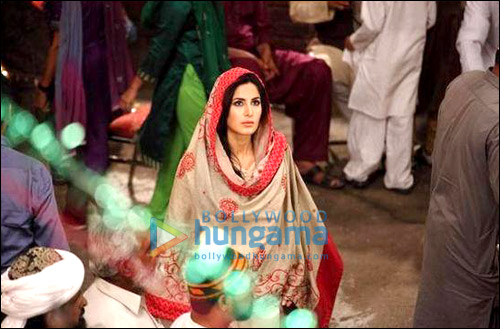 Action, adventure and drama... that's what Phantom promises to deliver. The film, which will see the pairing of Saif Ali Khan and Katrina Kaif for the first time, will have the actress donning different avatars.


Recently, Katrina Kaif was snapped in a rather de-glam avatar where she was wearing a pretty red and brown salwar kurta, with the dupatta covering her head. The surroundings indicated that this shot was taken amidst a dargah. Just like in Kabir Khan's previous film Ek Tha Tiger, this film too will have Katrina Kaif in the role of a secret agent and hence the different looks.


Saif Ali Khan too will be seen in varied avatars since he too will be playing the role of a special agent. The actors will also be seen doing some death defying stunts in the film. The film travels through locations such as Vancouver, Canada, Chandigarh, Kashmir and others. Produced by Sajid Nadiadwala in association with UTV, Phantom is slated to release on April 3, 2015.