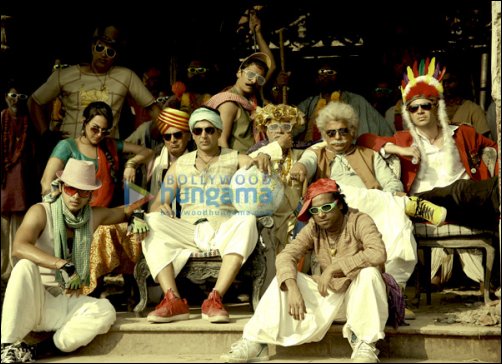 The makers of Joker, had a unique challenge in hand which was to dress up their characters in as weird and funny manner as possible. Though the film stars actors like Akshay Kumar and Sonakshi Sinha, who are expected to look chic and stylish in every outing of theirs, there is a particular setting in Joker, which required them to go on the contrary.

"Joker has a village setting to it, with characters playing simpletons who come from humble backgrounds. However, there is a moment in the story where they get rich. Now for these villagers turning rich means spending money on clothes and accessories. Since they don't have a sense of style and believe that wearing an array of western accessories equates to being funky, they end up buying random shoes, shades, and other accessories of various shapes and sizes. The end result is a comic setting that can be seen from the still above", informs a senior crew member.

Joker is a fantastical affair by Shirish Kunder which promises to take audience into a new world, while being aided with 3D technology. While there are talks about it being a sci-fi film with aliens being an integral part of the film's narrative, one only gets intrigued with how it all fits in with such a funny looking wired setup as can be evidenced from this film still.

"Well, for this you would have to wait to see how the story unfolds, any thing more that I say at this point in time will end up revealing the film's story line", laughs Shirish, "All I can say is that shooting for this part of the film was one of the most hilarious experiences that we had during our stay at Chandigarh. We went berserk while buying these artefacts from the actual mela that was set for the film. In fact, the shades which Sonakshi is wearing were bought by her only. She sneaked out to a near by market place and picked it up on her own."