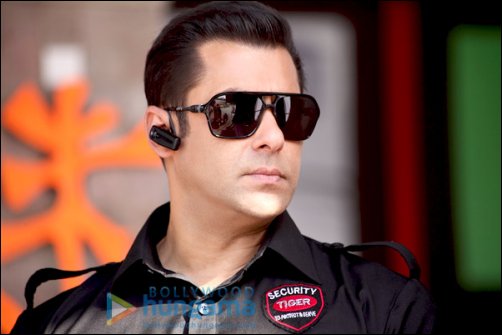 Salman Khan, who will be seen in the power packed Bodyguard, has proven once again that he is one of the biggest superstars of the country.

In the film, Salman plays a bodyguard, of course, and there were many agencies who were vying to get Salman Khan to wear the uniform of their company. The companies were hard selling their uniforms, as it would've done wonders to their business, if Salman was seen wearing their uniform, since it was so integral to the narrative of the film.

However, the actor who has a heart of gold put his foot down, and decided to wear the uniform, of his personal bodyguard, Shera. Even though, people were ready to offer Salman money, to the tune of Rs. 7 crores, just to sport their uniform, Salman was adamant and very sure that he would be sporting no other brand.

Salman graciously decided to wear the uniform with his real life bodyguard's name Tiger (Shera) written on it. The Mumbai schedule of Bodyguard begins this week.

Atul Agnihotri, producer of Bodyguard says, "We have been getting calls from various security agencies from the day we announced the film. However, Salman bhai is absolutely clear that he wouldn't wear any agency's uniform. Shera is his personal bodyguard whom he is close to and has used his name as a tag."

Salman, returns to the big screens on Eid this year. Every year when Salman has an Eid release, he has made sure that the box-office rocks. This will be his trilogy of Eid releases (Wanted released on Eid in 2009 and Dabangg in 2010).

Bodyguard is co produced by Reliance Entertainment and Atul Agnihotri's Company and is directed by Siddique.