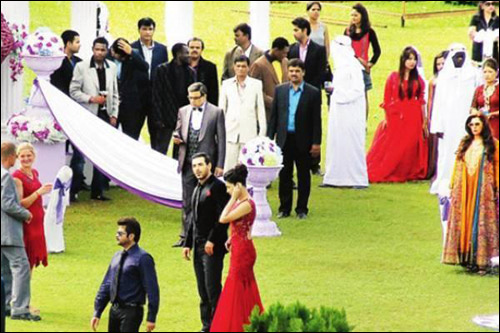 After tasting success with the action comedy Welcome, Anees Bazmee is back with the sequel Welcome Back. While the first installment saw the sizzling chemistry between Akshay Kumar and Katrina Kaif, this time around the film will bring the fresh pair of John Abraham and Shruti Haasan on screen.

As the film seems to be in its final stages of shooting, the co-stars John Abraham and Shruti Haasan were spotted on the sets of the film at Kamal Amrohi Studio in Mumbai. John was dressed in black jacket and on the other hand, Shruti Haasan was seen in a red dress and updo. Anil Kapoor too was present at the venue looking suave in black denims, purple shirt and a tie.

Filmmaker Anees Bazmee revealed that the scene in question is that of John Abraham and Shruti Haasan's engagement. He further added that this shot is one of the most crucial points of the film and as everybody gathers together to enjoy this occasion, things go terribly wrong. Something similar had happened even in the prequel when Akshay Kumar and Katrina Kaif got engaged in Welcome.

Welcome Back which was initially slated to release during Christmas may get postponed as one final leg of shooting is still pending. Produced by Firoz Nadiadwala, the film also stars Nana Patekar, Paresh Rawal, Naseeruddin Shah, and Dimple Kapadia in prominent roles. Welcome Back is now slated to release on January 23, 2015.