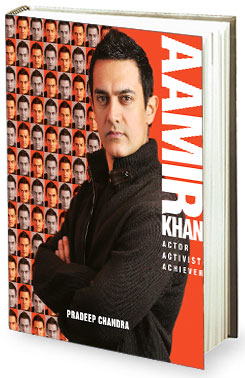 I was tremendously excited to catch hold of 'Aamir Khan - Actor Activist Achiever'. A coffee table book spanning over 250 odd pages with Aamir Khan staring at you from the cover, it was just what one was looking forward to after catching several books that have already been written on Shahrukh Khan, Amitabh Bachchan, Rajinikanth, Dilip Kumar, Dev Anand, Hema Malini, Madhubala and more. For an actor who is indeed an activist and an achiever, it was about time that someone presented a worthy enough write-up on him. Hence, this effort of author Pradeep Chandra was just the kind of gift I was looking forward to.

50 pages into the book and I realized that this was a 'very good looking' book - actually let me say, 'excellent' - with a perfect layout. Also, the vocabulary was just perfect too that made the book an easy read. It had all the right ingredients for a coffee table outing, what with just the perfect balance between pictures and the written word.

However, what was missing here was the most important aspect that I was expecting here - 'Some original, unheard of content'!

Instead, what one gets to read in the book is the kind of stuff that one could hunt over Wikipedia to begin with and then some relentless Google search. Frankly, if a fan boy would have been given an opportunity to put this all together, he may not have come up with something impeccable but then would have still exceeded expectations, considering he wouldn't have been an author by profession.

In case of 'Aamir Khan - Actor Activist Achiever', all one ends up hearing about are the anecdotes and incidents related to Aamir Khan that have been common news for years now. His childhood, growing up stage, debut, acclaim with Qayamat Se Qayamat Tak, marriage, series of flops, career turnaround, decision to go slow, a long break, personal problems in between, class quotient attached to films that followed, mega-star status, the 'perfectionist' tag and eventually 'Satyameva Jayate' - one reads all about it but then doesn't discover anything at all that is unknown.

At best, it turns out to be a well compiled affair and that too a pretty filtered one, as anything and everything that would have had to do with controversies in the (personal) life of Aamir Khan are conveniently ignored. Of course that could well have been the case even in an official biography or an autobiography as well. Still, one would have taken that with a pinch of salt as at least something else would have been narrated about Aamir Khan's life that wouldn't have made it to Google yet.

However 'Aamir Khan - Actor Activist Achiever' doesn't even take that lane. It sticks to what is public information already and what ends up being all the more surprising is some of it being repeated from one chapter to another. No editor at play here?

I heard somewhere that Aamir Khan wasn't particularly keen around the making of the book and it was primarily Pradeep Chandra who put it all together on his own. In that perspective, the author does well to play a one man game and presents the side of Aamir that he knows or sees as an outsider.

Now one wishes that the super-star actor, activist and achiever, who deserves a much detailed, deeper and decisive biography, gets to say and indulge in a lot more when an official account of his personal and professional life hits the shelves!