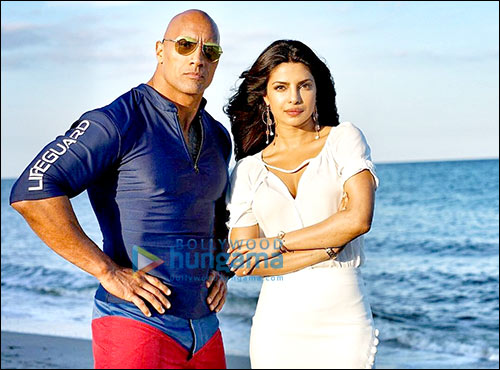 Earlier this week we gave you a sneak peek at Priyanka Chopra's look in her upcoming Hollywood release Baywatch. Well the actress who was pretty vocal about her villainous character even posted a few images of her look from the film. Now talking about Priyanka her costar from the film who happens to be none other than Dwayne 'The Rock' Johnson recently posted an image of the two of them from location.

Commenting on Priyanka Johnson posted, "Every great story starts with a great villain... My sistah @priyankachopra is one of the biggest and most beloved stars in the world. When I asked her how she felt about playing opposite me as our main #BAYWATCH villain she simply said with a sly and seductively evil smile, "Oh you're going down..." Cool is the rule, but sometimes bad is bad. Thank you PC for the strong work week and see you on the rebound in GA. #GoodLordIGotMyHandsFull #ChopraDontPlay #BAYWATCH SUMMER 2017."