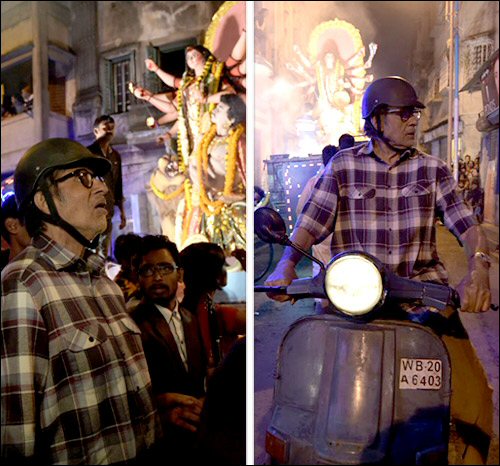 Kolkata is a famous city not just for sweets and the varied fish delicacies, it is also known for its colourful festivals and one such

popular one is that of Durga Pooja. Sujoy Ghosh's next TE3N, that once again captures the realistic nature of the Bengal capital, will have a significant

sequence that revolves around Durga Pooja and Amitabh Bachchan recently took to Twitter to give us glimpse of it.


Posting two pictures of the actor riding a scooter amidst the backdrop of Durga Pooja, Amitabh Bachchan tweeted, "Recreating Durga Pooja for 'TE3N' film on

the narrow congested but historic lanes of North Kolkata .. !!" He further added, "And the love and cooperation of the people of Kolkata .. !! Incredible !"

The makers definitely need to be applauded for this piece of commendable work, where they recreated a festival celebration in January, which generally falls

in the month of October. On the other hand, Amitabh Bachchan also expressed his gratitude towards the locals of the city who co-operated equally with the

actor and the makers for the film. It is definitely not surprising to see Sujoy use this auspicious festival in his film as the filmmaker had previously

used these celebrations as a backdrop whilst filming the climax of the Vidya Balan starrer Kahaani.

TE3N also stars Nawazuddin Siddiqui along with Vidya Balan in a special appearance. The film is directed by Ribhu Dasgupta and produced by Sujoy