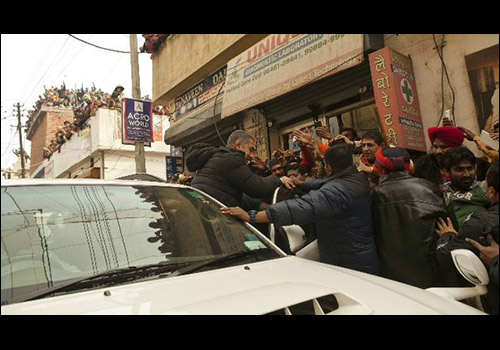 Readers may be aware that Aamir Khan is currently in Ludhiana, Punjab shooting for the ambitious venture Dangal, a biopic based on real life wrestler Mahavir Phogat. However, considering the fan following of the superstar, recently Aamir Khan had to face tough situations whilst shooting for the film in the town.

Keeping in mind that the film is a biopic, the makers have been trying to shoot a lot of sequences in real life locations. Often, fans are overwhelmed to see such superstars around which results in chaos amidst shoot schedules. Recently, Aamir Khan too had to face such troubles and the actor ended up spending hours at a small house in the vicinity in order to avoid the mob. Though the security managed to clear a portion of the crowd for Aamir so that he gets the space to walk from the house to the vanity van, many people were still loitering around the vicinity to catch a glimpse of the star.

Produced by UTV-Disney and Aamir Khan, Dangal is directed by Nitesh Tiwari and also stars Sakshi Tanwar along with debutants like Fatima Sana Shaikh and Sanya Malhotra. The film is slated to release on December 23, 2016.