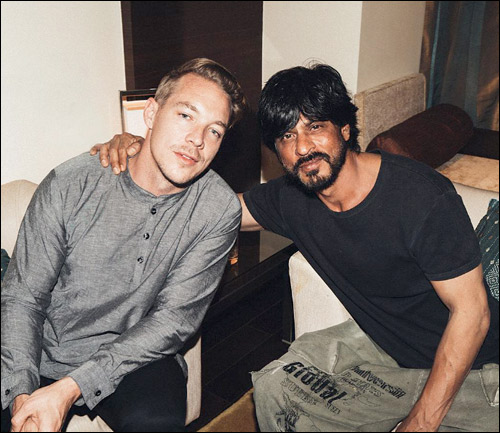 While we all know the popularity Shah Rukh Khan enjoys within our country as well as abroad, the superstar has even collaborated with international artists for his films.

Recently, while popular DJ Diplo made a visit to India, he decided to catch up with Shah Rukh in Goa where the actor is shooting for an upcoming film.


DJ Diplo is an American DJ, record producer, rapper and songwriter based in Los Angeles. The musician recently tweeted an image with Shah Rukh Khan whilst the former was in Goa and said, "Watching

some @MAJORLAZER videos w the legend @iamsrk". From what we hear, Diplo specially decided to fly to Goa before he could come to Mumbai for the gig, in order to meet the superstar where he not only

interacted with King Khan but also spent time with him on the sets of his upcoming film. It is also being said that Shah Rukh Khan took Diplo sight-seeing and treated him to popular Goan cuisines

which included curries, fish and rice.