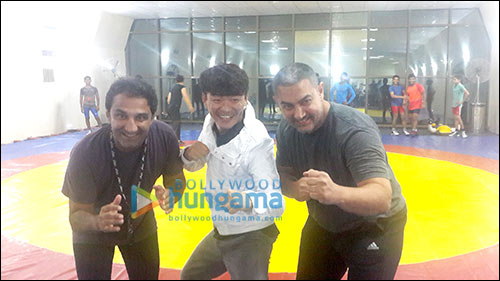 Popular Chinese star Wang Bao was recently seen in Ludhiana in Punjab where he paid a visit to Aamir Khan on the sets of his upcoming film Dangal. There is an interesting connection between the two stars as Wang is the celebrity who dubbed for Aamir Khan in the Chinese version of his last blockbuster PK.


From what we hear the Chinese superstar had specially flown down to India to meet Aamir. He was very curious to know how Aamir Khan works and wanted to witness it himself. Wang spent a good 4 days with the entire unit and the actor where he even got to witness Aamir's wrestling moves which the actor has been preparing for his character in his forthcoming film. Wang was impressed with Aamir Khan's skills and also tried to learn a few himself along with Aamir and his wrestling coach.

Spokesperson of the film confirmed the news and added, "Wang Bao Qiang was keen to witness Aamir's work pattern first hand. He planned an impromptu visit to India on learning about Aamir's long shoot schedule in Ludhiana for Dangal." Aamir and Wang had initially met when our Bollywood star had flown to China during the release of PK in the country and the two of them have stayed in touch ever since.


For his upcoming film Dangal, Aamir Khan plays the role of a wrestler whose character is inspired from the life of popular wrestler Mahavir Phogat. The film, directed by Nitesh Tiwari also stars Sakshi Tanwar, Aparshakti Khurrana, Sanya Malhotra, Fatima Sana Shaikh among others and is slated to release on December 23, 2016.