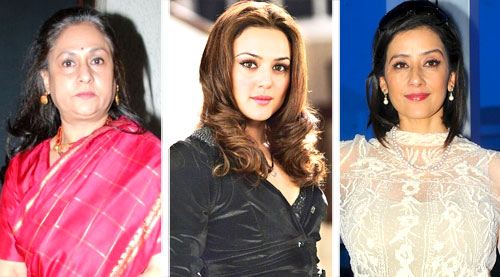 Jaya Bachchan, Preity Zinta and Manisha Koirala dreamt of owning a home in Paris. In the wake of the ghastly terror attacks on Friday night they are wondering what happened to

1.An Evening In Paris (1967): The first Bollywood film to be shot in the city of love and lovers, the film boasted of the gorgeous Sharmila Tagore in a bathing suit (and not a

bikini, as is wrongly propagated) and Shammi Kapoor wooing Sharmila from a helicopter in a dressing gown. The Parisians just stared politely.

2.London Dreams (2009): Though called London Dreams the most memorable portions of this Salman Khan-Asin-Ajay Devgn starrer were shot in Paris.

3.Jhoom Baraabar Jhoom (2007): Remember Abhishek Bachchan and Lara Dutt singing 'Ticket To Bollywood' with the Eiffel Tower as the background. I swear, Eiffel out of my chair.

4.Jeena Sirrf Mere Liye (2002): This long-forgotten remake of the vintage Suraiya film Anmol Ghadi has recall value only for Kareena Kapoor dancing in front of the Eiffel

Tower in a blood-red ghagra-choli.

5.Ishkq In Paris (2013): The quality of the film may be debatable. But no Indian film in living memory has captured the city and its spirit so beautifully.

6. Queen (2014): Director Vikas Bahl had a dream. He wanted to shoot a film about a middle-class girl from Delhi who dreamt of a honeymoon in Paris. And Vikas would not compromise on

the location of his heroine's dream even though the project couldn't afford the expensive city. So Paris it was. And can anyone imagine Queen without the city of dreamers and dreams?

8. Mera Pehla Pehla Pyaar (2007): Remember Ruslaan Mumtaaz evening-time tryst with his lady love at the Eiffel Tower? If this film has any recall value, it's because of its Parisian