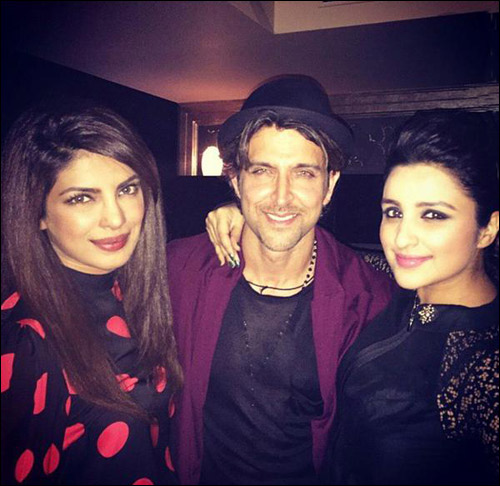 Though 2014 was a fairly successful year, career wise, for Hrithik Roshan with his film Bang Bang crossing the 100 crore mark, his personal life has been going through a turmoil. The actor, who was granted divorce from his wife Sussanne Khan, has now decided to move on and partied till wee hours on his birthday. There was news that even Hrithik's father-in-law Sanjay Khan threw a bash for the superstar on his 41st birthday.

Recently we spotted a few pictures uploaded by celebrities on social networking sites, which gives us a glimpse of what happened at Hrithik Roshan's birthday bash. Hrithik, who looked handsome in his semi-casual party avatar, was seen posing with the hot and glamorous Chopra sisters (Priyanka and Parineeti Chopra). On the other hand, Ali Zafar too posted a picture of the party along with Hrithik. Talking about it he said, "Fantastic evening. Happy birthday #hrithikroshan. A man who's all about love." Adding about the party, Parineeti Chopra tweeted, "What a happyy party last night!! @iHrithik is one of the sweetest people and hosts :)"
Tags : Ali Zafar, Bang Bang!, Check out, Hrithik Roshan, Parineeti Chopra, Priyanka Chopra, Sussanne Khan