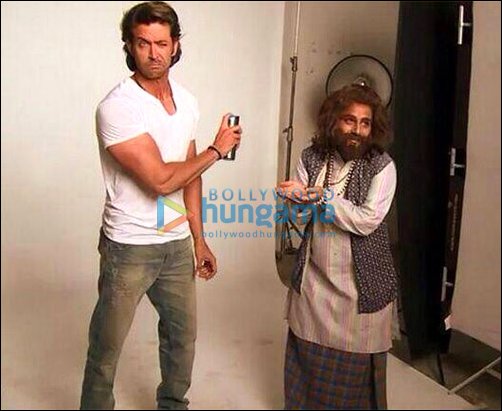 True to the nature of detective, it is Vidya Balan who is of late snooping around people's life. The reason? She is busy promoting her role as an amateur sleuth in Bobby Jasoos. The actress who has changed many get-ups for the film recently appeared in the garb of a beggar and shocked many Bollywood celebs.


One of them who fell for this joke was Hrithik Roshan. While the actor was busy shooting, a weird looking, smelly beggar interrupted his shoot and Hrithik was left shocked by this action. It was later on, that the actor realized that it was Vidya Balan in disguise. The actor then got into his witty mode and stated that the beggar (Vidya) is in need of a deodorant. Posting a picture of the same on Twitter was producer Dia Mirza, who tweeted, "Aaj #Bobby ne kaafi masti ki! Kal bobby Baroda mein hogi ;)"

It was not just him, but later other actors who fell for this prank were brothers Arbaaz and Sohail Khan. Their reaction was captured in this video. Check it out.