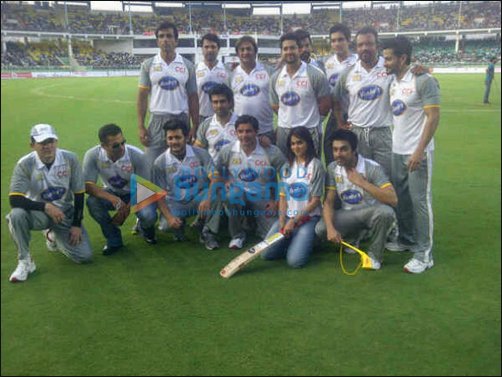 The Cricket Fever is on in full swing courtesy the ongoing Cricket World Cup 2011. While Dhoni and his 'Men in Blue' are busy fighting it out on the cricket field, our B-town boys are also not too far behind. Some of Bollywood's biggest names came together to participate in a charity cricket match against some of the Superstars of the South Indian film industry. The match was held over the weekend in Vizag.

The Hindi film industry team called itself 'Mumbai Heroes' and was represented by the likes of Salman Khan, Sohail Khan, Riteish Deshmukh, Aashish Chowdhry, Kunal Khemu, Harman Baweja, Sonu Sood, Mahesh Manjrekar and Apoorva Lakhia amongst others. While the South team had biggies from South Indian film industry including the likes of Venkatesh, Suriya etc While the event was mostly an all boys affair, the chirpy and bubbly Genelia D'Souza was very much present to cheer the Mumbai Heroes.

In the end, the Mumbai Heroes ended up losing the match but a blast was had by all the boys over the weekend.

Poster of Mahesh Manjrekar and Jagjeet…

Sonu Sood speaks on scholarships for…