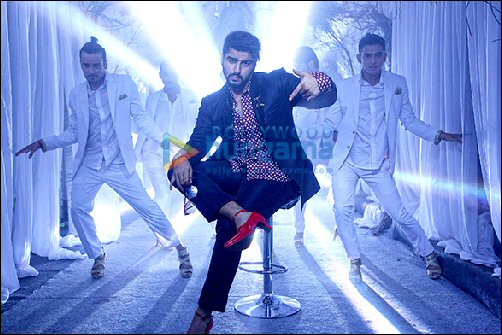 Touting to be a hatke rom-com, Ki & Ka's trailer did pass across the message of breaking away from the stereotypical roles of an alpha man and a woman in a relationship. Emphasizing on the theme further was the recently released song 'High Heels'.

'High Heels', a party number originally created by YoY o Honey Singh, has been re-composed by Meet Bros for this upcoming Arjun Kapoor and Kareena Kapoor Khan starrer. What more grabs our attention in the video of the song is to see Arjun wearing a pair of red heels over his well suited avatar. Apparently, it is a representation of the fact as to how a ka (male) feels when he fits into the shoe of a ki (female). Readers may be aware that Kareena plays the role of a career oriented ambitious wife whilst Arjun plays a house husband in the film.


Directed by R. Balki, Ki & Ka is produced by Hope Productions in association with Eros International and is slated to release on April 1.