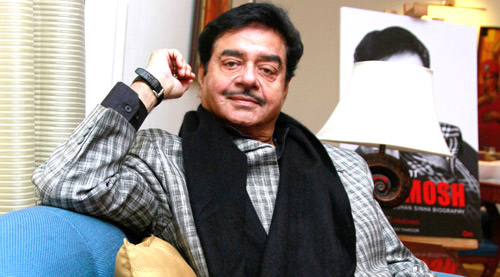 Shatrughan Sinha is angry and upset that fellow-Bhari Kanhaiya Kumar is being branded anti-national and seditious without unimpeachable evidence. That Sinha invites the wrath of his party-men by his rebellious stance doesn't overly perturb him. Unvanquished by the threat of being branded a rebel party-member, Shatrughan Sinha in an interview with Subhash K Jha lashes out at the current branding of Kanhaiya Kumar as an anti-national.

Your tweet on Kanhaiya Kumar has created a hungama?

You tell me; didn't I do the right thing? Why are we labelling the boy seditious without proof? In the Telegraph dated Feb 16, the full text of what he said has appeared. There is nothing seditious or anti-national about what he has said.

But sections of people including lawyers have pounced on him?

This is really disturbing. We as a country should thrive on the principle of diversity in unity. Ekta mein anekta. In a democracy everyone has the right to an opinion and to freedom of expression. That doesn't give anyone the right to say anything anti-constitutional. But I repeat â€¦ Kanhaiya Kumar, from what I know, said nothing anti-constitutional. If I am wrong he should be punished according to the laws of our country.

How do you define anti-national?

See, that is the problem. If he is talking about burning down the nation or destroying our constitution he is anti-national. Otherwise if he has made careless utterances, gusse mein (in anger), josh mein (in his enthusiasm), nadaani mein (in his naivete), bachapna mein (in his immaturity) then we must understand we are dealing with young impressionable minds that often speak before they think.

Do you think the Administration handled it properly?

It should have been tackled within the campus. Yeh andar ka maamla hai. The Vice Chancellor should have been more prompt and judicious. He should have taken stern action and rusticated the students found to be indulging in anti-national activities. Why were cops called on the campus and that too so casually with the VC's permission?

The entire matter seems to have been unnecessarily politicized?

I agree. It should have been handled on the campus.

Are you so sympathetic towards Kanhaiya Kumar because he is from Bihar?

Bihar is most definitely my weakness and strength. But this is a matter of justice, not regionalism. I'd have spoken up for Kanhaiya Kumar even if he was from some other state. So far from what I've seen read and heard, he has said nothing seditious. And please let me make it very clear that I am not speaking about the other students. Only about Kanhaiya Kumar. I have no idea about what the other students did or said. That's a law and order situation. Under no circumstance must we allow anyone to incite violence against our nation. That is not acceptable. And please don't for a second think I am condoning anti-national activities.

Aren't you afraid of pissing off your party folks?

Life is not an ongoing party (laughs). There are times when one needs to stand by the truth. My strength is my honesty. I've lived by my principles. To me, politics is not my profession. I've come into politics as a mission. I'll always practice healthy politics. Even in this matter some vested interests are hell-bent upon criticizing me for standing up for the boy.

Kanhaiya Kumar was roughed up in the court premises?

It's wrong. We belong to a nation that preaches non-violence. And we have violence being perpetrated against journalists and students in the premises of the court right under the watchful eyes of our legal custodians. Kanhaiya is a son from an Indian family. He is an Indian. And he says he is proud to be one. Why should we not believe him?

A lot of people have stopped listening?

If they stop screaming they will hear the boy's protests. I will repeat what the boy said, Please maintain peace and do not get carried by hearsay. I don't believe in any kind of violence. And violence against the nation? Never! Not in this life. Lekin woh log hamaare bachche hain. It should have been handled on the campus level. So sad that this is happening at the prestigious JNU which has given great leaders and statesmen. Pressing sedition charges against students for activism within the campus shows the failure of the administration, not to mention the over zealousness of police action.