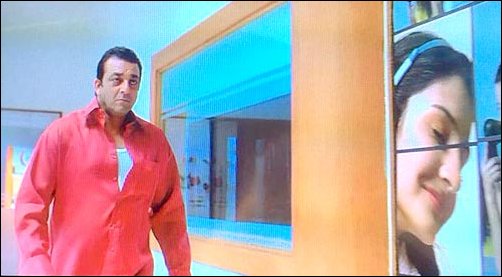 We all know as to what Rajkumar Hirani's Lage Raho Munnabhai did to the careers of Sanjay Dutt, Vidya Balan, Arshad Warsi and others. Well, if we were to tell you that, besides the 'prominent' names involved in the film, there was also Anushka Sharma who featured in the movie, you probably won't believe us.


Interestingly, an image grab of the film has suddenly been doing the rounds on the web since a couple of days. The image shows Sanjay 'Munnabhai' Dutt walking across Vidya Balan's radio station and on the adjacent wall is a huge poster of Anushka Sharma enjoying the songs on her headphones! Who knew that yesterday's 'poster girl' will become one of the most sought after actress today.


Anushka Sharma even retweeted this image when it was brought to her notice. Ironically, Anushka starred in Raju Hirani's last film PK as the lead actress.