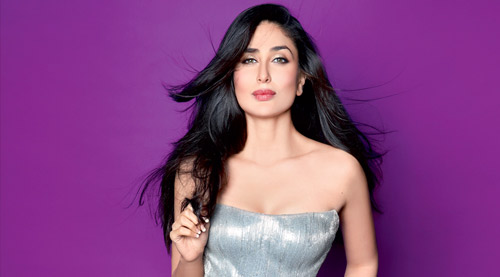 Hailing from a film family, acting kind of runs in her blood. Yet Kareena Kapoor Khan has seen failures and has later, emerged victorious with some of the most iconic films in

Bollywood. She is someone who is known for her firebrand roles on screen and her straight-forward attitude off-screen. While her last release was the blockbuster hit Singham Returns, she is

now all set to rewrite history with Bajrangi Bhaijaan, a film that promises to set all the records on fire.


Satish Sundaresan of Bollywood Hungama met up with the one and only Kareena Kapoor and came back not only being totally mesmerised with her extremely down to earth nature, but also adding

his name to the ever growing fan base of the Kapoor superstar.


Kareena, to start with, the release of Bajrangi Bhaijaan is just around the corner, what is the feeling now?

It's a lovely feeling. I feel really honoured. It is the first time when Salman Khan has turned a producer and he has cast me in his film. I think it is an absolute delight. I know Salman Khan from

his Nischay days with Bhappi Soni and my sister Karisma Kapoor. Salman and I have worked together in Bodyguard and that people have loved us together. That way I am sure that people

will really love us in Bajrangi Bhaijaan.


You play a Brahmin girl named Rasika. Can you tell us something more about her? Was there any special preparation that you did for the role?

There was no 'preparation' as such for the role, but we definitely worked a lot on the look, because I play a school teacher from Chandni Chowk.


The very first time a person hears the name 'Bajrangi Bhaijaan', it does take a moment for such a unique name to get registered. What about you? What was your immediate reaction when you heard

All that I can tell you right now is that, this is the perfect title for the film, as Salman Khan plays a 'Bajrangi' ka bhakt, and he is 'bhaijaan' anyways. But, when you see the film, you

will understand the real reason as to why the film is called as Bajrangi Bhaijaan.


What made you say yes to Bajrangi Bhaijaan? Was it Salman Khan, the script, your role in the film or the film's director Kabir Khan?

I think that the dynamics of the film sometimes come together. It is not necessary that you need to have an earth shattering role. This is a commercial potboiler which has a trim and proper

direction. It is not just a mere film with lots of action and comedy in it. Bajrangi Bhaijaan has a story, relevant direction, the sense of milieu of the atmosphere for the audience.

Needless to say that, Salman is definitely a bonus, but I have never worked with Kabir Khan before. To work with a new director is what I want now.

This is the first time that you are working with Kabir Khan. How did you find him as a director? Have you seen his earlier films (Kabul Express, New York and Ek Tha Tiger)?

I have seen his work in Kabul Express and New

York. Kabir is such a kind of filmmaker who will make big budget blockbusters, which have a meaning to them. As a human being he is lovely and as a director he is even better. He is technically

so sound and he knows his craft so well that he knows where to place the camera for best results in the film, which makes his film open up into a great landscape. In simple words, he is a

travelogue director. The way he travels through his films is simply wonderful.

Considering it's a 'Salman Khan' film, there are oodles of expectations from the film's music.

My favourite song is the 'Selfie' song, because it is commercial and massy and also it has Salman Khan in it. Music of the film goes with the theme of the film. It is nothing like there are

songs which have people dancing in places like America or London. The songs have not been thrusted into the film. When there is no requirement of a song, there won't be any song.

How different is Rasika from all the other characters that you have played so far?

Rasika is a very simple and down to earth girl, who helps Salman in the journey that he takes on. She is more like the emotional crux in the film.


Buzz is that the film is about you and Salman playing a Brahmin girl and a Muslim guy respectively. How do you react when people go on to claim this to be your real life's story!

Honestly, Salman is NOT playing a Muslim guy. He is playing a hanuman ka bhakt. I play a Brahmin girl from a Brahmin family. Why he goes to Pakistan and all the other details follows a

journey. People are only jumping the gun and writing their own script about a 'Brahmin girl and a Muslim guy'.


What are the locations where Bajrangi Bhaijaan has been filmed?

We have shot in Karjat, Kashmir, Delhi, up in the peaks of Gulmarg, Somnar, Amritsar and other places. Like every Kabir Khan film, this film too will take you through a lovely journey. It is an


You have said that this will be Salman's career's best film and that it will have Salman in a completely different light altogether. What makes you say that?

We all know that Salman is amazingly outstanding in whatever he does. Even in the last couple of films in terms of his looks, performance, his dance etcâ€¦ he is fabulous. In Bajrangi

Bhaijaan, you will not see Salman Khan for whatever he is known for. He is doing something that is more emotional after a very long time.


People have termed Nawazuddin's character in the film as something to 'watch out for'. What is so very special about his role?

He is a brilliant actor. In whichever films that we have done together, we did not have scenes together. Be it Talaash and even in Bajrangi Bhaijaan, even though we don't have scenes

together, let me tell you that he has got a special character in the film. The film just picks up with him.


Everyone has been talking about the little girl Harshaali Malhotra. She has been told to be the 'turning point' of the film. Can you please tell us something more about her?

According to me, she is the hero of the film. Her performance is delightful. Her face suits the character. Overall, she is outstanding in the film.


What are the factors that you consider while signing any film?

It all depends. When you have a film with Salman and Kabir, you just want to be a part of the film, come what may. There are different criteria for different film. Sometimes the role is brilliant,


other times the script is fabulous. When I heard Balki's script, in the interval part itself, I said that I am doing this film as I knew that it was a heroine oriented part.


Is there any film that you have rejected and then regretted?

I am not the one who will regret anything, both in my personal life as well as my professional life. I just can't be a part of everything.


One thing about Salman Khan that nobody knows?

I think Salman Khan is one actor who is so unfazed by his superstardom, and that's what makes him a superstar. He doesn't make an effort to show that he is a superstar.


Why is it that you are not on any of the social networking sites?

It is an added responsibility. My fans keep my alive.


What do you say about the Khan brigade helping out each other? In fact, Shah Rukh Khan even tweeted the first look of Bajrangi Bhaijaan?

I think it works in the social media space. All the three are all legends in their own rights. I don't think that there is any tension between them the way the media perceives it to be.


During the shooting of Bajrangi Bhaijaan, your bonding with the Kashmiri locals was indeed the talk of the town, so much so that a few Kashmiri college girls bunked their college to meet

you... only to be rewarded your outfits from the film's wardrobe as parting gifts?

I went to Kashmir for the first time. I somehow feel that I pass off as a Kashmiri. Even the girls out there told me that they were my biggest fans mostly because I look like a Kashmiri. I thought

that was a sweet compliment to pay to me. I would remember my school days when I used to bunk my school and watch Karisma's shootings. I gave out the outfits from the film.


Were there any security issues while shooting in places like Kashmir, Srinagar, Gulmarg and Pahalgam?

The security was very well organised. We were treated like kings and queens out there.

This is the first time that you have shot in the serene locales of Kashmir. How was the experience?

The entire Kapoor khaandaan had shot in Kashmir, except for me. It was an irony. I just had to do it... as in shoot in Kashmir, and what better way than to shoot with Salman.

First, it is a story that needs to be told. Second, it has Salman Khan. Third, of course, it has the hit pairing of Salman and me.


Generally, Eid releases, esp. with Salman Khan have always struck gold. Considering that Bajrangi Bhaijaan is the first Eid release of your career, are you already sitting on a goldmine?


Shuddhi has now gone to Varun and Alia, which was unexpected. What's your take on this?

I think they will do a lovely job and justice to the film. It is sad that we never got this opportunity to work with Hrithik. But, as they always say 'Never say never'.


How has marriage changed you as a person? Has it changed anything for you professionally?

I don't think that it has changed me in anyway. Professionally, I have always worked at my own pace and I continue to do that. I am happy to be the working married woman. I have always wanted that.

What are your forthcoming films?

I am committed to do a film with Rajkumar Gupta and then, there's Balki's film. After that, I will be doing a song for Brothers and then, Udta Punjab.


Speaking of Udta Punjab, it stars Shahid Kapoor, the very man who is getting married soon. Will you be attending the marriage?

I am not invited. The fact is that my wishes and my utmost blessings will always be. I think that he is in his happy space in life and is doing very well in his career. And that automatically helps


How do you feel when you see your onscreen characters of Geet and Poo still ruling the roost in some way or the other?

It really feels great. But, I personally prefer Chameli as compared to Jab We Met.