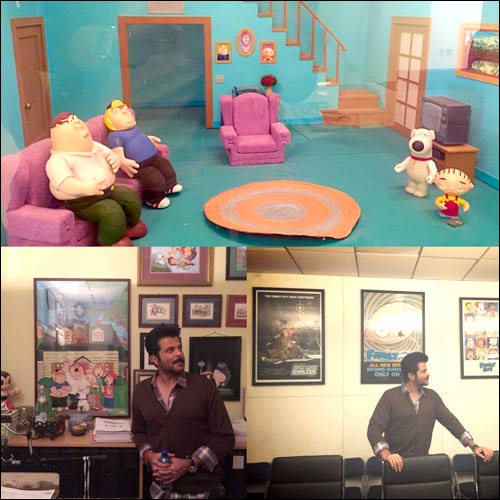 While Anil Kapoor's Hollywood calling happened long ago with Slumdog Millionaire, the actor further continued it with Mission Impossible: Ghost Protocol and TV series '24'. Now, with the American series 'Family Guy', the actor returns to American TV, but this time only with his voice.

Joining the likes of Brad Pitt and other Hollywood stars who have done guest appearances on this animated show, this time around it will be Anil Kapoor who recently flew to Los Angeles to complete his dubbing. He had mentioned that his character will appear on the show with the famous Griffin family. Now tweeting about the experience, he shared a few pictures from the studio on his Twitter handle saying, "Stepping into the world of Family Guy #SuperExcited to be a part of the lovably crazy Griffin family @FamilyGuyonFOX". Talking about the experience, he further added, "Honoured to be a guest on #FamilyGuy Thank you Linda and Steve. @FOXTV @FamilyGuyonFOX".

On the Bollywood front, Anil Kapoor will soon be seen in Zoya Akhtar's Dil Dhadakne Do where he will play a suave Kamal Mehra, father of Ranveer Singh (Kabir Mehra) and Priyanka Chopra (Ayesha Mehra). The film is slated to release on June 5, 2015.
Tags : 24, Anil Kapoor, Check out, Dil Dhadakne Do, Family Guy, LA, Mission Impossible - Ghost Protocol, Slumdog Millionaire