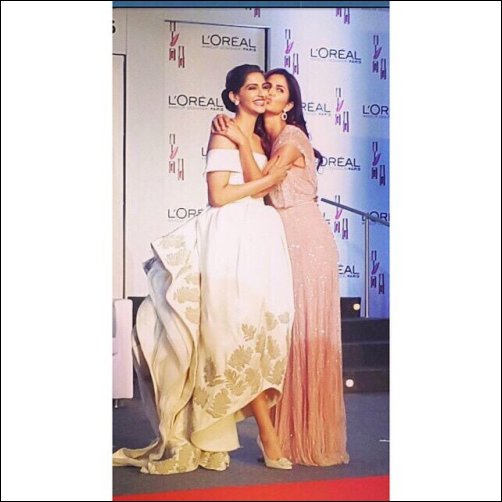 Sonam Kapoor and Deepika Padukone had fueled up a controversy when they appeared on the chat show, 'Koffee With Karan', leaving Rishi Kapoor miffed over the comments they had

passed on Ranbir Kapoor during the show. Later, there were rumours that Sonam Kapoor was not really fond of Katrina Kaif, considering her alleged relationship with Ranbir. However, putting an end

to all those speculations, in the recent media meet of the brand L'Oreal for Cannes, we spotted the two brand ambassadors, Katrina Kaif and Sonam Kapoor bond like the latest BFFs in Bollywood.

Katrina Kaif will be making a debut at Cannes this year for the same brand (L'Oreal) that Sonam Kapoor has been endorsing for over five years. The two who were sharing the stage for the press

conference were not only having a friendly chat but Katrina even kissed Sonam's cheek during the meet. Sonam Kapoor shared the moment on her Instagram page with a caption saying, "It was amazing to

share the stage with the pretty #Katrina! See you at #cannes beautiful".

Later, Katrina Kaif was seen rubbing the lipstick mark lovingly from Sonam's cheek during the event. Katrina Kaif, who joined Twitter with the name @KatrinaatCannes to give her fans constant

updates from the festival, shared the picture of the same on her new Twitter handle saying, "Such a fun day with the gorgeous @sonamakapoor at the @LOrealParisIn press conference!


While we all are well aware of Sonam Kapoor's stylish appearances at Cannes, everyone was curious about the attire that our Katrina Kaif will be donning at the red carpet of the prestigious film

festival. The actress, with a smile, mentioned that she hasn't decided on the outfit and further added that if she doesn't find one, she might just borrow one of Sonam's.