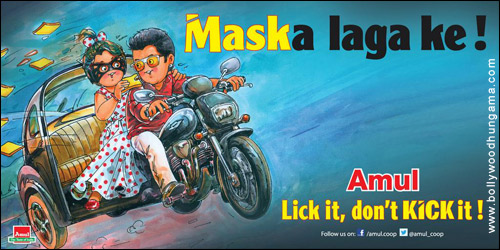 Last week saw the release of one of Bollywood's most awaited film Kick, starring Salman Khan and Jacqueline Fernandez. Continuing the tradition of paying tributes and commenting on the current events, the dairy major Amul has yet again come up with something really creative in accordance to the film.

The poster has the caricatures of Salman Khan along with the Amul girl. The poster shows Salman driving a rickshaw while the Amul girl wears the 'Devil' mask from Kick. Aptly titled, 'Mask-a laga ke', with the caption 'Amul: Lick it, don't Kick it', it is surely a tribute to Salman's popularity.