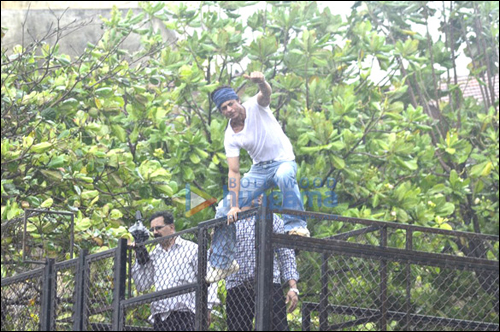 Shah Rukh Khan has always taken up the initiative to interact with his fans on all special occasions including his birthday. The actor who is busy with Farah Khan's Happy New Year, however, could not hold a party for Eid but nevertheless, decided to meet his fans on this auspicious occasion.


Shah Rukh Khan revealed that he is currently busy with the shoot schedules of Happy New Year and hence the actor could not celebrate Eid with his loved ones and well-wishers. Normally, during Eid, the Khan household is filled with friends and colleagues who enjoy a long party with delicious traditional food. However, this time around, though the actor could not lavishly spend this festive occasion, he continued with the ritual of meeting his fans outside his Bandra residence in Mumbai.

In fact, despite rains, the actor even decided to cross the barricaders, in order to shake hands with his beloved fans personally. Shah Rukh Khan, who loves to dress up in ethnic kurta and pyjama, was seen in casual denim and white tee this time. While the actor recently has been making appearances in a bearded look, this time around, he was seen in a clean shaven look.