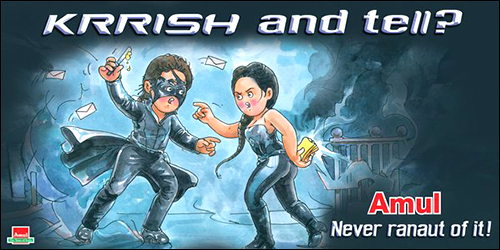 The diary major Amul has time and again come up with interesting and unique posters based on the ongoing events and situations. Now, it has come up with yet another poster on the much controversial legal battle between superstar Hrithik Roshan and award winning actress Kangna Ranaut.

Portraying the caricatures of Hrithik and Kangna from their film Krrish 3 where the actor played the role of the superhero Krrish and the latter played a negative character of a mutant, Amul's latest poster not only showcases the rage between the actors but also includes a rather witty one liner that reads, "Krrish and tell? (Kiss and tell), Never Ranaut (Run out) of it".

The alleged love affair between Hrithik Roshan and Kangna Ranaut that went kaput took an ugly turn after the two recently slapped legal notices of defamation at each other. Followed by that, several skeletons tumbled out of the closet with reports suggesting several versions of Hrithik and Kangna's story. Though the battle continues, none of the parties have spoken about it in public.