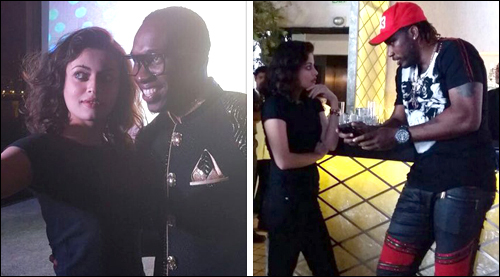 'Lucky' girl Sneha Ullal recently got an opportunity to interact with one of the most renowned cricketers Chris Gayle and also DJ Dwayne Bravo. Though the actress hasn't been able to make it big in Bollywood, she has been dabbling with films in South. And now she has come in news once again, courtesy her interaction with the cricketer.


Recently, Sneha Ullal was seen partying with cricketer Chris Gayle at a club along with DJ Bravo. Posting pictures on social media, the Bollywood actress said, "Danced and Partied with the #westindiescricket team tonight. @djbravo47 launched his new song #champion .So groovy So much fun.A night to remember #partywithsportz Thank you Vega entertainment for inviting me." Adding about her interaction with Chris Gayle she said, "Look at @chrisgayle333 being all cute last night . We danced and chatted .Such a cool person.Best of luck for tomorrows match .#partywithsportz #westindiescricket #champion".


Dwayne Bravo too took to Instagram to share about Sneha's presence during the launch of his song saying, "Bollywood in the house tonight @ DJBravo launch #Champion #snehalla@snehaullal".