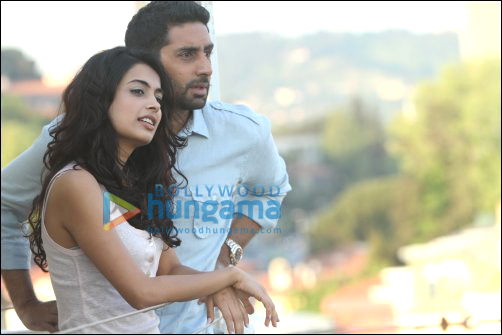 Abhishek Bachchan has an interesting line-up of releases this year and the first among them is Game produced by Excel Entertainment and directed by Abhinay Deo. This slick thriller stars AB Jr. along with Sarah Jane Dias, Jimmy Sheirgill, Kangna Ranaut, Anupam Kher, Shahana Goswami, Boman Irani & Gauhar Khan.

The film also has some really melodious music by Shankar Ehsaan Loy with lyrics by Javed Akhtar. One of the songs 'Maine Yeh Kab Socha Tha' featuring Abhishek and Sarah Jane is a beautiful romantic number which was shot over 10 days at various scenic locations on Istanbul. The crew left no stone unturned to give the song a classy look and also shot in an old church called Irini. By the looks of it this song is surely going to be a visual delight, something truly romantic with an exciting new pairing to look out for.