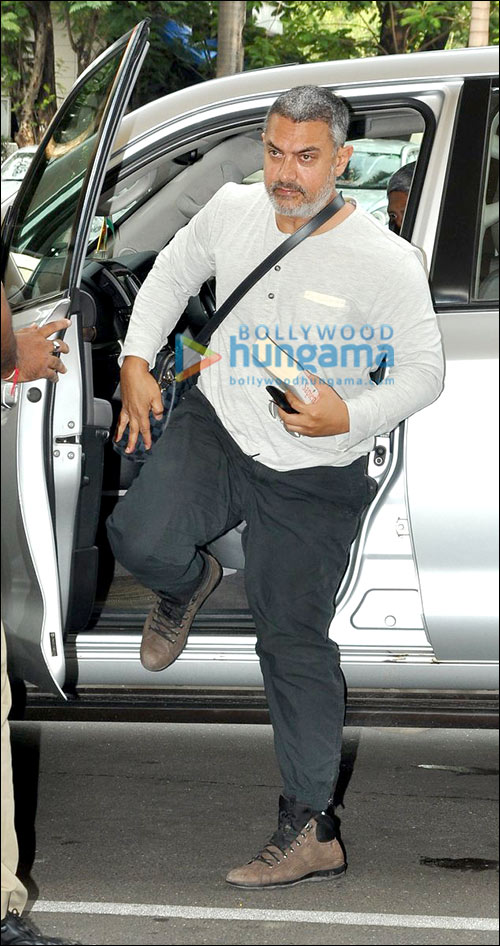 If there's one Khan who likes to keep everyone guessing about his 'next move', then it is indeed the 'Thinking Khan' aka Aamir Khan. By now, we all know that Aamir Khan is playing a wrestler in his much talked about film Dangal, a film that is based on the famous wrestler Mahavir Singh Phogat.


Photographer's delight that he is, Aamir Khan became the 'target' of the camera lenses when he was leaving for Ludhiana to shoot for the film. What really shocked one and all was the 'extreme transformation' that he has undergone in terms of his physique. The once lean and muscular body with the six pack abs to boast has now given way to an extremely beefed up body. If that wasn't enough, Aamir Khan made no qualms about sporting his grey and white hair. Aamir Khan, who was wearing a white full sleeved tee with full length cargo pants and his brown ankle length boots, was indeed a head turner at the airport. It is not rocket science to say that, this is indeed Aamir Khan's most bulked-up look so far in his full career spanning many decades. In Dangal, his character will be seen in two phases: pre and post the weight gain.

Readers may recall that Aamir Khan is best known doing challenging roles and has always experimented with his looks, be it in Mangal Pandey: The Rising, Ghajini and more recently PK. So it comes as no surprise that he has gone out of his comfort zone yet again.


Besides Aamir Khan, Dangal also stars Sakshi Tanwar (playing his wife) and Fatima Shaikh, Zaira Wasim, Suhani Bhatnagar and Sanya Malhotra playing his daughters. Dangal is based on the life of former wrestler and coach Mahavir Singh Phogat, who left no stone unturned in training his three daughters and one niece for the Commonwealth Games. Dangal is being directed by Nitesh Tiwari.