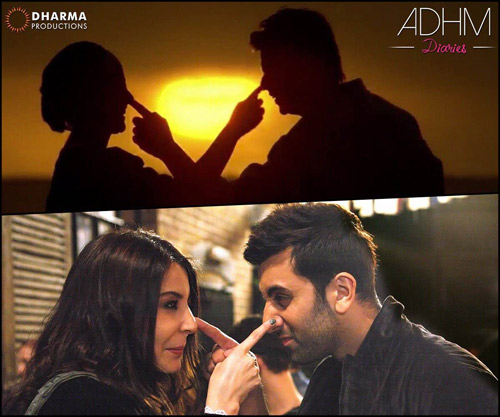 Being one of the most ambitious projects of Karan Johar's, Ae Dil Hai Mushkil has also created an impact owing that the filmmaker is known for his romantic films. Also the cherry on the cake is the first time collaboration of Karan with former beauty queen Aishwarya Rai Bachchan. And making it even more iconic is that touch of KJo's cult film Kuch Kuch Hota Hai.

Giving a glimpse of the same, the recently released picture has Anushka Sharma and Ranbir Kapoor recreating the friendly antics of Rahul and Anjali played by Shah Rukh Khan and Kajol respectively in Kuch Kuch Hota Hai. Interestingly, we hear that the film which is about unrequited love showcases a similar friendly bond between Ranbir and Anushka. The film is already seeing a positive buzz ever since the trailer hit the tube and will also see Karan directing a film after his last, a much successful Student Of The Year which established the careers of three popular Gen Y stars Alia Bhatt, Varun Dhawan and Sidharth Malhotra.

Also starring Fawad Khan in a prominent role, Ae Dil Hai Mushkil is slated to release on October 28 and will be clashing with yet another Diwali release, Ajay Devgn's Shivaay.