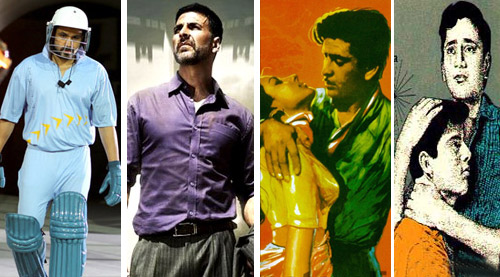 Amaal Mallik has replaced Pritam at a late stage in Ekta Kapoor's Azhar. There is an official explanation (Pritam's illness in February derailing his schedules and the

film being at the finishing line) and a couple of diametrically opposite unofficial ones as well that will remain unsaid. It remains to be seen if Amaal will be composing solo here, as in

Airlift (where he turned down the only song later done by someone else), and we will watch if he consolidates his solo success in Airlift.

Music directors being changed in Hindi cinema happens at all levels-that is, the original choices are finally not on for whatever reasons, or they are dropped from a film, or quit the film for

their own reasons. While there are dozens of examples of each, we would prefer to list those wherein the results were truly standout, in films that became milestones for the replacement composers'

Raj Kapoor was thinking of signing Ram Ganguly for this film again after his debut directorial Aag-Ram was the in-house composer for Raj's father Prithviraj Kapoor's Prithvi Theatres.

However, his uncle, Vishwa Mehra, knew the major contribution music assistants Shankar Raghuvanshi and Jaikishan Panchal had made on the score, and told his nephew about it.

And so Raj Kapoor made Shankar-Jaikishan form a duo and compose the all-time historic score that changed Hindi film music for ever. The music remains a blueprint for Hindi cinema even today, and

was the first score to show that a music industry separate from the parent film could be possible. Today, Hindi film music leads the music industry in India.

After the phenomenal Aarti, producer Tarachand Barjatya of Rajshri Productions wanted Roshan to score music for this film as well. But after watching the Bengali original movie, the veteran

thought that it was a story of 'two beggars' with no scope for his music. At that point, Laxmikant-Pyarelal were also arranging music for dubbed South films that Rajshri would distribute and an

impressed Barjatya signed them for what was to be their first breakthrough.

By 1969, Laxmikant-Pyarelal had rejuvenated Rajendra Kumar's career with the musical hit Anjaana, and the actor approached them for this film that he was 'presenting' (read financing) for

brother-in-law Ramesh Behl. But L-P, who had 12 films on hand then, turned down the offer, as they felt that they had too much work. R.D. Burman's name was recommended by someone else, and he came

in to score his final breakthrough, for The Train zoomed him to a position that even Teesri Manzil and Padosan had not.

was making Dharam Karam alongside with R.D. Burman, and Rishi Kapoor reveals that his father whimsically wanted to take R.D.'s father for a film with the younger son! But Mukesh

convinced Raj to go to L-P, or if they could not do the film, to Kalyanji-Anandji. L-P were reluctant to break the Raj Kapoor-Shankar-Jaikishan association (Jaikishan had passed away by then) and

signed the film only after Mukesh told them that if they turned it down, it would go "to someone else but not back to Shankar."

Mehmood, who had introduced and backed R.D. Burman all along, had mentally decided on him even for this film. His son, Lucky Ali, was great friends with Rajesh Roshan and took him to meet his

father. Rajesh Roshan heard one song situation and came up with the stunning lullaby 'Aa Ri Aaja Nindiya'. The song moved Mehmood to tears, and the film became his! 42 years after this all-

hit debut, Rajesh Roshan is still around. His next is Kaabil starring nephew Hrithik Roshan.

Laxmikant-Pyarelal had been announced as the original composers, and suddenly, newcomer Bappi Lahiri was declared as the choice for this small film. The film flopped, but the music was a rage and

the songs live on, especially the title-track by Kishore Kumar.

After Daag, it was a foregone conclusion that Yash Raj Films' second production would go again to L-P. A film with Amitabh Bachchan and Parveen Babi, Gardish, had even been launched

but later shelved. But the first hint of trouble after L-P were signed for Kabhi Kabhie came in the first music sitting, where no one in the filmmaker's group could agree on any tune

offered. Then Sahir Ludhianvi pitched for the out-of-work Khaiyyaam for this "story of a poet" and the maestro staged his commercial comeback.

Another loss for R.D. Burman, this Mansoor Khan film saw him reluctant to work with his father Nasir Husain's permanent director of 22 years because R.D. had known Mansoor since he was a kid and

the filmmaker felt that it would be difficult to assert himself if there were any areas of disagreement on the music.

Mansoor had made a short film called Umberto with music by struggling composers Anand-Milind, and they came in for the score that turned the music industry around. QSQT heralded a

Nadeem-Shravan are the third composing entity after R.D. Burman and Bappi Lahiri to get their breakthroughs because of L-P. The senior duo had even recorded a song for Salman Khan, but creative

differences with director Lawrence D'Souza led to their exit. And Saajan, the biggest hit of 1991, was the film that proved that N-S were no flukes after Aashiqui and could handle a

This Venus film was announced with Nadeem-Shravan. But Nadeem had serious doubts about musical scope in a revenge drama and crime thriller. The duo decided to back off, and Venus and the director

duo Abbas-Mustan opted for Anu Malik, who Venus had always supported through his flop phase between 1989 and 1992. Anu staged a whopping and lasting comeback in that year and this film lead his

onslaught in its magnitude of success.