Alia Bhatt, who was last seen in Kalank, is currently in Varanasi shooting for Dharma Productions’ ambitious venture Brahmastra with beau Ranbir Kapoor. While the two of them are completing grueling schedules, film producer Anu Ranjan who is also the mother of Alia’s besties Anushka Ranjan and Akansha Ranjan Kapoor, posted a pic from the older days. She shared a rather rare throwback photo on her social media page which featured little Alia posing with superstar Hrithik Roshan. 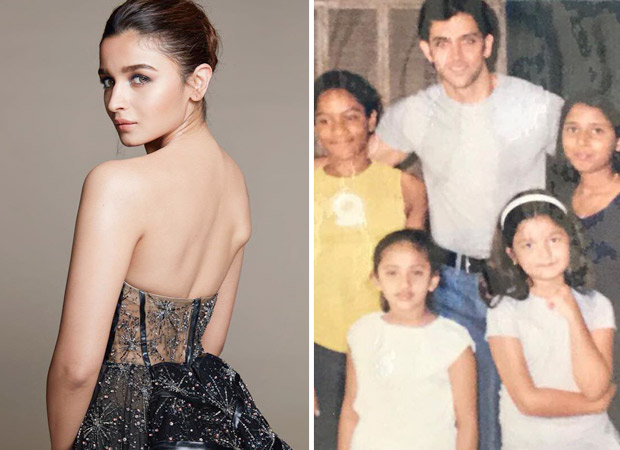 Anu Ranjan took to Instagram to share this rare piece of gem from the childhood album of her daughters Anushka Ranjan and Akansha Ranjan Kapoor. Besides them, the photo features Alia Bhatt, Shaheen Bhatt and Masaba Gupta too. Readers would be aware that this group has been besties since their childhood days.

These are the most adorable ones ,without realising ????????

Going by the photo, it seems that it was taken during Kaho Na Pyaar Hai days. 90s kids would recall about how smitten people were by Hrithik Roshan and everyone became his fan instantly after his debut. Alia and friends too seemed to have a fangirl moment when they met Hrithik that time.

On the work front, Alia Bhatt will next be seen in Ranbir Kapoor starrer Brahmastra. She has been signed on for her father’s film Sadak 2 and her mentor Karan Johar’s directorial Takht starring Ranveer Singh, Anil Kapoor, Kareena Kapoor Khan, Janhvi Kapoor, Bhumi Pednekar, Vicky Kaushal amongst others.