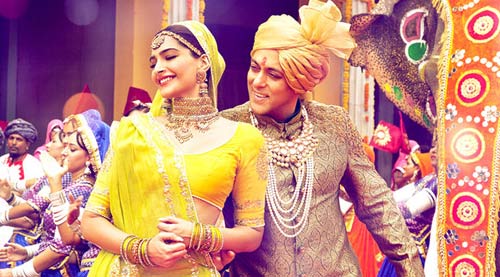 
Then there was prolonged silence between the two friends. Back together to create history, would the 'Prem' duo be fourth time lucky?


An emphatic yes comes from trade expert Komal Nahata who says, "I think it will be bigger than everything that has come before it. It has the germs to be the biggest ever so far. The honesty and integrity of the family drama shows in the trailers and promotion. And Salman and Sooraj Barjatya's connect with the public is, of course, legendary!"


Adds trade analyst Atul Mohan, "The opening of PRDP is going to be HUGE. It should create new records for the opening day, for the first three days, first four days and first week."


Producer and censor chief Pahlaj Nihlani says, "PRDP has the potential to change the very definition and direction of popular entertainment in cinema. It is a film dedicated to Indianness, to our culture our sanskriti. If it works as hugely as the trade expects it to be, it could change the way the young people in India think dress and talk. The clothes that Salman Khan and Sonam Kapoor and the language that talk are more Indian than anything we've seen in recent times. For once the lead pair doesn't look like a carbon copy of models from American fashion magazines. This film has the potential to revive the golden era of Indian cinema."