The star cast of Bunty Aur Babli 2, Saif Ali Khan, Rani Mukerji, Siddhant Chaturvedi, and debutant Sharvari, have wrapped shooting of the film. And they did it in style by shooting a fun, entertaining song at Yash Raj Films studios. Given that the shoot was happening in the middle of the coronavirus pandemic, YRF ensured that all safety measures were followed to a T. The production house also ensured that all necessary health check-ups were done for everyone, medical staff were present on the sets and the team also told the entire cast and crew to follow quarantine procedures before the shoot so that the sets became a safe shooting zone for everyone. 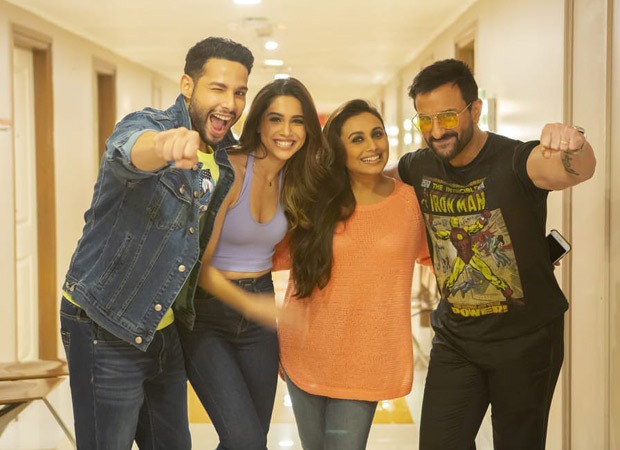 Director Varun Sharma says, “We took all possible steps to ensure that we had the safest shooting environment and we are happy to report that nothing untoward happened on the sets of Bunty Aur Babli 2. The entire crew, including all actors, underwent coronavirus tests before the shoot and then the crew was quarantined in hotels so that they are safe and don't contract the virus. The actors underwent home quarantine and didn’t meet anyone during the shoot. Transportation of the crew members from the hotel to set and then back to the hotel was also done by YRF. Drivers of these cars and vehicles were also tested and quarantined with the crew. So, we operated with the highest possible safety measures. These are precarious times and we have to follow the strictest health mandates so that the industry restarts. I’m thankful that it all went well because this will give confidence to the entire film industry to return to shoot.”

Saif says, “We had a blast on the sets, thanks to the stringent safety measures taken by YRF. These are highly sensitive times and actors, producers, crew, everyone will have to be extra cautious because there is a risk element. I was amazed by the steps taken to ensure that we have the best shooting experience. It felt safer than at home. I hope everyone in the industry can be as caring and as careful as Aditya Chopra. When the entire team came to the set, we were sure that the virus isn’t going to harm us and it’s a hugely relieving feeling. Thus, the shoot became so much fun. The BB2 team was meeting after so many months and we had the best time chilling, bonding, and shooting with each other.”

Bunty Aur Babli 2 will introduce an incredibly fresh pair as the new talented conmen. Siddhant Chaturvedi, the Gully Boy hunk who played the role of MC Sher with elan, is the new Bunty and YRF is launching a new heroine to watch out for with this franchise. Babli will be played by Sharvari, a stunningly gorgeous girl that YRF discovered two years back and has been grooming her since then.

The film, in an exciting casting coup, also reunites Saif Ali Khan and Rani Mukerji and will present them as the original Bunty Aur Babli in the film. Saif and Rani were a blockbuster Jodi as they delivered big hits like Hum Tum and Ta Ra Rum Pum and were celebrated as a pair to watch out for given their infectious chemistry.

Rani adds, “We shot this sequence in the pandemic and we were made to feel extremely comfortable on the sets because YRF took all the necessary precautions before the shoot commenced. So, we were all sure that none of the crew members, including the actors, had the virus. It was an important step that has ensured a smooth and stress-free shooting experience. We had an amazing time shooting with each other. It brought back so many memories of us shooting before the pandemic and the entire team brought it all to the dance floor”.

Siddhant explains, “It was amazing being on the sets to shoot again. I love my BB2 team and I was really missing the entire team. We had such a fun shooting experience before the pandemic and then we couldn’t shoot or meet each other. I’m glad that we could have a safe, fun shoot because of the steps incorporated by YRF. It was so much fun meeting Sharvari, Saif sir, Rani ma’am, and the entire team of the film. This team is really special and we had the best time shooting and wrapping BB2.”

Sharvari further elaborates, “I was really looking forward to meeting the entire BB2 team again. BB2 is my first film and the team of my debut film will always hold a very special place in my heart. I missed the entire team thoroughly and I was waiting to meet them again to wrap the film. As luck would have it, we had to wrap by shooting a fun song sequence and there was no better way to meet the entire team again and bring the house down with a lot of positivity, joy, and madness. We felt completely safe shooting with such a big crew because we knew that all measures were taken to keep everyone safe!”

Produced by Aditya Chopra, Bunty Aur Babli 2 is an out and out entertainer which is being directed by debutant Varun V. Sharma, who worked as an Assistant Director in YRF’s biggest blockbusters Sultan and Tiger Zinda Hai.