South Korean singer-songwriter-producer PSY, who recently celebrated the 10th anniversary of his 2014 smash hit single ‘Gangnam Style,’ returned to the music scene after five years with his ninth full studio album Psy 9th, and the title track 'That That' was co-arranged, co-written, and produced by BTS’ resident all-rounder, SUGA. After storming the charts and song becoming a viral sensation, BTS' rapper took the stage this past weekend to enthrall the audience. 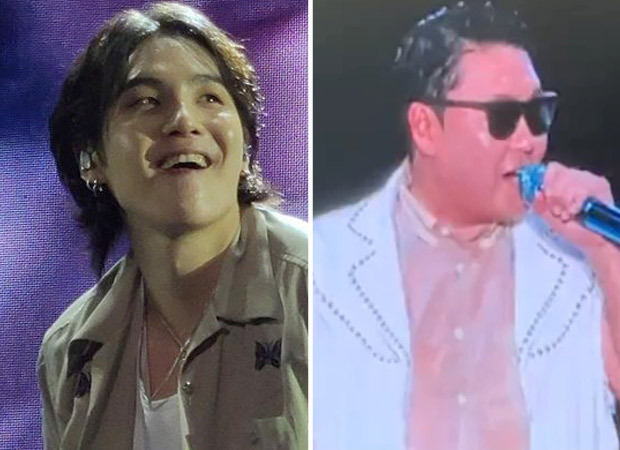 BTS' SUGA made his surprise appearance at PSY’s SUMMER SWAG 2022 concert in South Korea marking his first live performance on 'That That'. Throughout the promotions, the singer performed the song alone with his dancers. But, this time, SUGA joined him on stage and enthralled the audience with his solid stage presence.

YOONGI DANCING THAT THAT CHOREO pic.twitter.com/NgJ5UmHq3u

1:18 YOU SAW THE EXACT MOMENT THIS PERSON LOST THEIR SHT WHEN MIN YOONGI WALKED IN AND I FELT THAT SO MUCH ????? pic.twitter.com/wDdYfuDYrG

According to the Korean media portal, Soompi, 'That That' made its debut this week on Billboard’s Hot 100 chart at No. 80, as well as at No. 2 and No. 5 on Billboard’s Global Excl. U.S. and Global 200 charts! The two latter entries mark the highest peaks on these charts for any BTS member’s solo work, as well as PSY’s first-ever entries.

On the Global 200 chart, 'That That' debuted at No. 5 with 67.7 million streams and 29,600 units sold globally during its first week of release. This marks PSY’s first entry on this chart and Suga’s second, following his No. 37 peak in December with 'Girl of My Dreams,' his collab with Juice WRLD. While BTS continues to hold the record for most Global 200 No. 1’s with six titles, 'That That' is now the highest-charting solo project from a BTS member and the first top 10 entry.

Moreover, on the Global Excl. U.S. chart, the smash hit ranked No. 2, with 61.5 million streams and 18,800 units sold outside of the United States, which marks the first and second entry on this chart for PSY and SUGA respectively.

Psy 9th marks PSY’s first comeback in about five years, following the last album PSY 8th 4X2 = 8, which was released in May 2017. The album officially dropped on April 29 which includes features from Suzy, Jessi, HWA SA, Tablo and Crush among others.