Shah Rukh Khan is all set to make 2023 his year with three big releases after a gap of four years, starting with the film Pathaan. It will be released in theaters in January next year. Apart from that, he will be seen in Atlee's Jawan in June 2023 followed by Rajkumar Hirani's Dunki in December 2023. As it turns out, he has wrapped Mumbai's schedule of Dunki already, the actor headed to London last week to kick off the international shoot schedule. 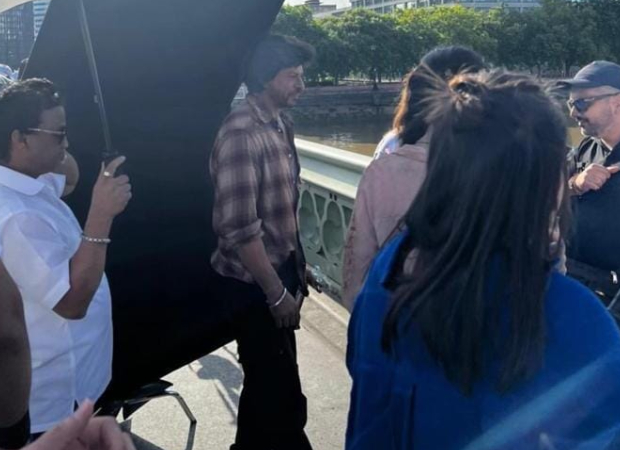 Shah Rukh Khan's photo has been leaked from a London shoot in which he is sporting a messy hairdo, a plaid shirt and black pants. The actor is all smiles as he shoots at Waterloo bridge in London.

EXCLUSIVE picture of Megastar #ShahRukhKhan from the sets of #Dunki in Waterloo Bridge, London. pic.twitter.com/n8glLK8xSa

The cast is expected to shoot in London and Budapest following which the actor will return to India to resume Atlee Kumar's Jawan shoot.

While Taapsee Pannu wasn't seen in the picture, she recently was all praises for SRK and Rajkumar Hirani. Speaking to Bollywood Hungama recently, the actress said that she is grateful for Dunki coming her way. "I am so happy and glad that it is this film I am doing with Rajkumar Hirani and Shah Rukh Khan. I will not shy away when the film releases thinking 'Sirf hero ke liye kar li ya or because of Raju sir kar li'. Who wouldn't want to be in an SRK film? I was lucky that I got this one which has such a pivotal part. It is more than whatever you have seen any female actor do in a Raju sir film," she said.

The film will be backed by Khan's Red Chilies Entertainment. The film will be released on the big screen on December 22, 2023, and will star Taapsee Pannu in the lead role as well.