BTS WEEK on The Tonight Show Starring Jimmy Fallon is getting better with each passing day. The world's biggest group, that hails from Seoul, South Korea, has been putting up some eye-grabbing performances all the way from their home for the viewers around the world. On their third day on the late-night talk show, BTS played fun games, sat down for a discussion with Jimmy Fallon, and gave a power-packed performance on 'Black Swan'. 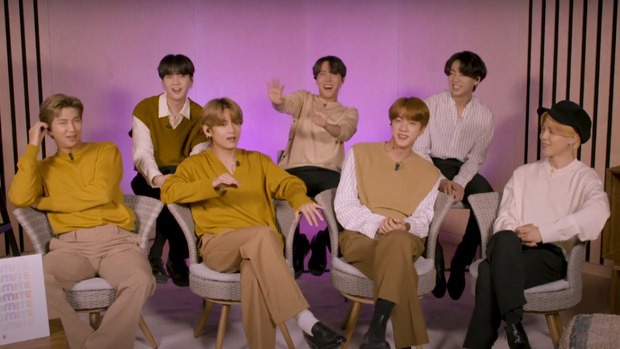 Starting with a fun game and showcasing their competitive side, BTS members RM, Jin, Suga, J-Hope, Jimin, V, and Jungkook played the game of Dance Your Feelings where all of them competed with Jimmy. Didn't it remind the fans of RUN! BTS variety show where all the members are always participating in games?

This was followed by a sit-down conversation with the host about their record-breaking success of their single 'Dynamite', their fans, high school memories, and the upcoming 'BE(Deluxe Edition)' album. Speaking of 'Dynamite' going No. 1 on Billboard Hot 100, Suga said, "We couldn't believe our eyes looking at the chart. It felt like a dream." The members echoed the same sentiments as all of them were in sync to say, 'Is this real?'

When Jimmy reminded Suga that his dream of going to the Grammys had come true, Jimmy further asked what it would mean to have a nomination. RM said, "GRAMMYs are truly the most honorable music awards that evaluate an artist's musical prominence and audience. So we all grew up watching the GRAMMY awards and we especially remember 2009, when T.I., Jay-Z, M.I.A performed. We saw all of them, then perform a presentation of a song of their own. Performing at GRAMMYs it is like our main goal and also a dream that naturally grew within us. Winning a GRAMMY in such difficult times could give great hopes and dreams to many people, including our ARMY!"

"What I really do love about you guys, from working with you and seeing your work, you have a great work ethic, you really are professional, but you're also very funny. You have a great sense of humor. Please don't ever lose that," Jimmy Fallon spoke about how BTS members have not lost their honesty and humour even after becoming such huge stars.

Furthermore, the seven members talked about how their high school experiences were and their responses were quite hilarious.

Lastly, BTS took the center stage all the way from Seoul to perform 'Black Swan' from their record-breaking studio album 'Map Of The Soul: 7'. The grandeur and the magnum opus set was absolutely ethereal as the septet showcased their modern contemporary performance in all-black outfits. The lyrics go, "If this can no longer resonate / No longer make my heart vibrate / Then like this maybe how / I die my first death / But what if that moment's right now / Right now." All in all, BTS flaunted their super tight choreography, incredible synchronization, and more importantly how good they are during their live performances.