Global superstars BTS are gearing up for the release of their next studio album, 'BE (Deluxe Edition)'. As each member has participated in the creation of the album, this new era of BTS has a lot of personal touch and uniqueness. The septet began early dropping 'BE' related contents in early October including a group concept photo, special handwritten postcards dedicated to the fans (called ARMY), two concept videos (mirror and reflection). Starting in November, Big Hit Entertainment began releasing individual concept photos curated by BTS members to showcase their creativity and how their individual vibe is like. Each room is a reflection of the member and how they perceive themselves. After the members V, Jimin, RM, Jungkook, Jin, and Suga, the last but definitely not the least member to discuss his room is J-Hope. 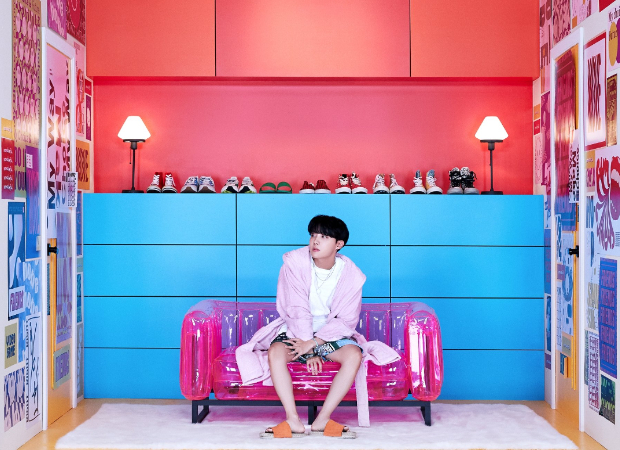 He begins his introduction of the room by explaining why he chose to have a bright room filled with various colors. "Hello everyone, welcome to J-Hope's room. I'm the curator, J-Hope. This room provides me mental tranquility and speaks of my identity and what sort of person I am. Like J-Hope, this space is bright, colorful, and filled with energetic ambiance. I hope that you can take with you some of this energy from this photograph of this room that I feel shouts out to the world who I am," he says.

Speaking about his look, he adds, "This outfit is all about comfort. It's a look that lets me rest and relax in my room, inspired by the look of the robe I actually wear when I am in my room."

Then, he further says, "What objects in this room do you think best represent me? I tend to pay close attention to how I'm dressed whenever I go anywhere. The shoes in the center of the room and the outfit I'm wearing are the elements that best represent me. The shoes show the colors of clothes that I most often turn to these days."

J-Hope's room can be interpreted as it seems like 'Daydream' music video meets 'Outro: Ego' music video. Seated on an inflated sofa, dressed in casuals yet making it look so stylish, that is what makes J-Hope stand out. There's a bunch of colorful shoes in the background of the room depicting how bright and vibrant his vibe is. The walls of the room have posters like 'Do it for yourself', 'My Choice', 'Future', 'Hope', 'Friends', 'Video Game' - words he swears by, friends he loves to spend time with and video games that he enjoys to play.  Adding to that, he also makes a callback to his song 'Outro: Ego' from 'Map Of The Soul: 7' through the poster 'My way, Make choice, My way'.

The triadic color scheme of the room is in fact adding so much brightness and that it is neither jarring nor one color is dominant over others. They blend well with each other. He reminds us that it is okay to find happiness in the smallest of things, and feel positive about it. These things are meaningful to him and he narrates it through his voice notes. Just like his name, J-Hope once again sends out hope and positivity into the world.

As mentioned in the previous articles, each room has doors, it seems like they are connected just how the seven members are intertwined. Their rooms depicted their personalities, their own perception of themselves, and how uniquely different they are from one other. What made these concept photos beautiful was how creative they are when it comes to highlighting their individual styles. Together, they form a well-structured unit. Like RM said in Break The Silence docu-series, "It’s like the seven of us are in a boat looking in different directions but going the same way. That’s how I define BTS members."

ALSO READ: BTS’ sixth concept photos from ‘BE’ features SUGA as he imparts wisdom on seeing your faithful reflection