It seems like the new era of BTS music will be a growing phase in their career! After dropping group concept photo, Dear ARMY postcards, and two concept videos (mirror and reflection) ahead of 'BE (Deluxe Edition)' release, they have now released interactive and innovative concept photos starting with member V, real name Kim Taehyung. 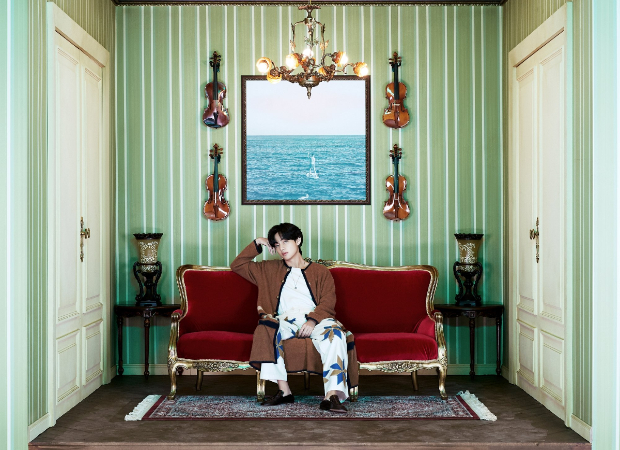 Big Hit Entertainment unveiled two concept photos on Twitter and directed the fans an interactive videos where V explained the idea behind the photo. In the first part, he introduces himself and narrates how the room was put together keeping his vibe in mind. "Hello everyone, welcome to V's room. I'm the curator V. I wanted to show my own vibes just as they are through this room. I arranged almost like an art gallery, with green and white wallpaper and door and objects laid out in symmetry with velvet sofa anchoring the middle. I hope you can really feel "V" in this room. I want you to make sure you get enough to eat even if you're busy, and I wish you can feel how happy I want your each and every day to be," V says.

He is seen wearing printed pants with a white t-shirt and brown cardigan - sort of a mix-match fashion that people around the world have opted for as the work lifestyle became remote amid the pandemic. "How did you feel when you saw this outfit? Did it seem like loungewear? Getting ready to go out?," V asks. "I wanted to show an outfit that is 'comfortable yet not very comfortable' and I'm curious if you saw it in the same way, too."

Since this album was curated during quarantine by all the members, each member seems to be following through a pattern where they will introduce their personal lifestyle and vibe. In the second audio version, V further cites, "What objects in this room do you think best represent me? It's hard for me to single out any one thing because each object really reflects the ambiance I feel is me. But, if I had to choose one that's the picture behind me. I think it's more meaningful because it's a picture I took myself. I was able to express what with what I saw through the viewfinder - both how I see the world and myself within that space. Which is why it's the one thing in this room that represents me the best."

The room has a photograph that was clicked by V, violins that he has been learning, and gives out a very pleasant Pinterest kinda vibe. In one of the album discussion vlogs that featured J-Hope, RM and V, RM had mentioned the concept stating, "We can start with simple drawings, like small rooms of our own. We can design them however we like and the staff could find the props that we need. Starting from the sketch, we can design our own sets, even what we wear." J-Hope said, "I like that (idea)." And then, V curiously asked, "Design our set?" They discussed that individual shots could be done according to each member's concept idea.

It really is the most 'BTS-esque' vibe from what we have witnessed till now. An interactive concept photo is a unique way to get the attention of the audience and make them understand the idea behind it. The approach towards this album is different but definitely gripping.  As V's room is designed according to his vibe and interests, he is giving a peek into his life and showing his true self from his perspective. It may look like a simple room but it's the smallest of things that make it more personal that one can find it relatable. Each member will get to showcase their lifestyle and what life has been like in the past few months while they have had an opportunity to reflect and reconnect with themselves. It feels more personal, comfortable, and feels connected!