The widely popular group BTS made their long-awaited debut at the Video Music Awards 2020 on August 30, 2020. After releasing the latest hit single 'Dynamite' on August 21 and breaking multiple records over the last few days, the seven members - RM, Jin, Suga, J-Hope, Jimin, V, and Jungkook - made their way to the VMAs for an explosive performance. 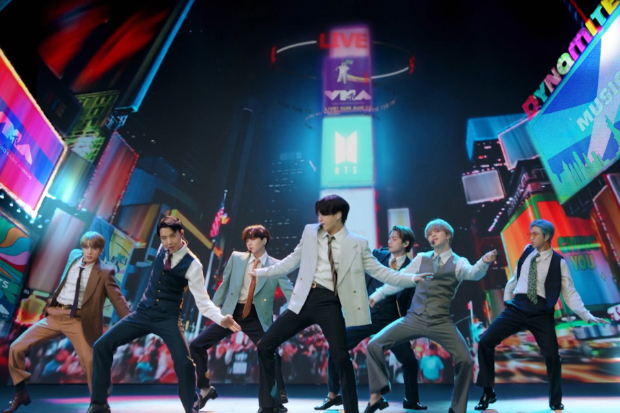 Dressed in classic suits, jackets and vests, bringing the bell-bottoms back with slick hair and beautiful visuals, BTS performed from Seoul, South Korea as the Brooklyn Bridge, Times Square, the Empire State Building among other New York spots were seen as the backdrop. The choreography was so on point as always and their sharp performance lit up the stage. The song finds the superstars spreading joy and happiness as they croon "'Cause I, I, I'm in the stars tonight / So watch me bring the fire and set the night alight (Hey) / Shining through the city with a little funk and soul / So I'ma light it up like dynamite, woah-oh-oh."

On the awards side, the group was nominated in four categories and won in all of them - Best Group, Best K-pop, and Best Pop for 'ON' - a song in Korean, Best Choreography - 'ON' making history again at VMAs 2020.

???? @BTS_twt is taking home the Moon Person for Best Pop at this year's #VMAs! ✨ pic.twitter.com/vfNyLM3ikU

'Dynamite' broke many records including racking up 101.1 million views in 24 hours making it the first music video to do so in Youtube history. The song has also ranked No. 1 in more than 100 countries already becoming BTS' fifth song to achieve this milestone after 'Black Swan', 'Moon', 'My Time', and 'Your Eyes Tell'. Their song 'Filter' has also received No. 1 in countries.