On the auspicious occasion of Mahashivaratri, the makers of Brahmastra decided to launch the logo of this sci-fi superhero trilogy. We got the first glimpse of this film featuring Ranbir Kapoor, Alia Bhatt, Amitabh Bachchan for the first time on this day at the popular Kumbh Mela in Allahabad. While the main actors of the film launched the logo there, the said logo was launched in two other languages, albeit by Baahubali director SS Rajamouli and South star Dhanush. 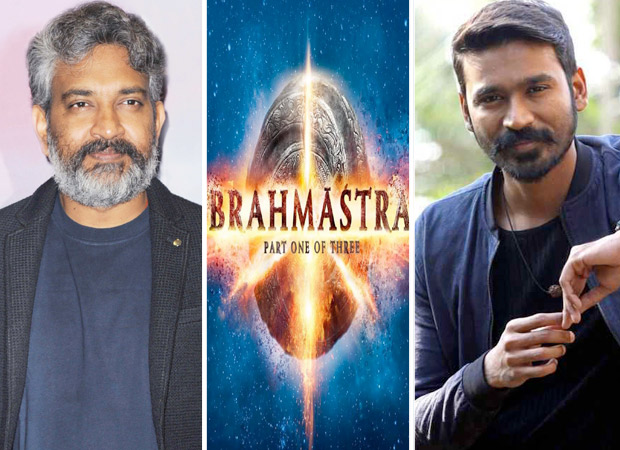 SS Rajamouli, who is known for his magnum opus Baahubali, is currently busy with another grand project in the form of RRR. While he has been posting about his upcoming film, amidst that, it was a surprise to see the filmmaker share the logo of Brahmastra, albeit in Telugu. He shared it on his official Twitter handle wherein he also revealed that he was given the responsibility of sharing the logo of this film. He posted saying, “Happy to launch the Telugu logo of the first Indian mythical fusion drama trilogy, #Brahmastra that’s being made on an epic scale with the magnificent star cast... Best wishes to #AyanMukerji @karanjohar @BrahmastraFilm.”

Happy to launch the Telugu logo of the first Indian mythical fusion drama trilogy, #Brahmastra that’s being made on an epic scale with the magnificent star cast...

On the other hand, a similar trend was followed whilst launching the Tamil logo. It was launched by none other than South star Dhanush. The actor, who made his debut in Bollywood Raanjhanaa, also took to Twitter to share the logo and the short teaser saying, “Glad to present to you the official #Brahmastra movie logo in Tamil. Best of luck #AyanMukerji @karanjohar @BrahmastraFilm,” he said. Here’s look at the tweet:

Glad to present to you the official #Brahmastra movie logo in Tamil https://t.co/rddiyyPIFy Best of luck #AyanMukerji @karanjohar @BrahmastraFilm

Brahmastra, directed by Ayan Mukerji, is expected to be a superhero drama inspired by Indian mythology. The film is a three part series featuring Ranbir Kapoor as the protagonist Shiva and Alia Bhatt playing his love interest. It also marks the return of South superstar Nagarjuna in Bollywood films and Mouni Roy is expected to play the antagonist. The film is expected to release by the end of this year during Christmas.