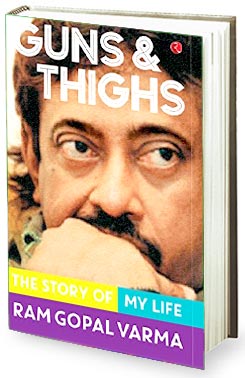 I was supremely excited on knowing that Ram Gopal Varma has penned a story of his life (though not necessarily an autobiography) with a title as enticing as Guns & Thighs. As someone who has liked or loved most of his films with only a couple or so that really went into that 'skip it' list (no, Aag or Daud weren't one of these), I was pretty much prepared to go through this 200 page book which promises to be as an unabashed and care-no-less affair. Moreover, following his blogs for many years (which he mysteriously stopped penning some time back), I could sense that yet again there would be good wit, sarcasm and honesty in the book.

Thankfully, I got all of that and more.

With as many as 33 chapters in there, hence accounting for an average of 6 pages each, what unleashed in front of me in this well packaged hard cover book were crisp accounts of quite a few interesting anecdotes from his life. Thankfully, unlike many a traditional filmy biographies/autobiographies that go from the days of childhood (have always wondered how a grown up could ever know the expressions of his parents when he was just born?) and end up being really boring accounts till the journey into filmdom kicks in, Ramu's Guns & Thighs doesn't follow a similar route. Instead, it charters its own path.

This is what makes the book truly interesting as Ramu takes a reader through his college days to the time when he got his break as a director to his goonda-gardi days in college to his lust for a female construction laborer to his fantasy for Sridevi to his admiration for Amitabh Bachchan to his uncomfortable conversations with his father to his assistant getting killed in a train accident to the guilt he carries for ruining Nisha (now Priyanka) Kothari's start as an actress to his video piracy days to the games he played in order to find a foothold in the industry to acknowledging that he had made blunders in his filmmaking career.

It is this roller coaster ride which keeps the book engaging as there is something interesting or another that pops up in every second chapter, if not the consecutive one. Moreover, you pretty much get what you expect from Ramu as there is a holds-no-bar approach followed by Ramu where he doesn't mince any words or tries to be politically correct. Yes, he does hold back on a couple of things. First and foremost, he doesn't name the actresses with whom he was actually involved with and secondly, he steers clear of talking about his family life (especially his daughter) though he does narrate a funny incident involving his wife.

That said, there are also a couple of things that pull the back book from being a great read that it could have been. First being that those who have followed his write-ups and several interviews would realize that at least 30%-40% of content in there has already appeared in several blogs that he has written. Hence, for someone like me, it was a strong sense of deja vu as some of the chapters too have been presented back as-is. Secondly, the very title and the marketing/publicity done around it - Amitabh Bachchan's gun and Sridevi's thighs, find just a passing mention that actually adds absolutely nothing than just the title.

It doesn't surprise though as Ram Gopal Varma as a filmmaker too has been a master in promoting his work and was a pioneer as far as cutting an interesting and attractive promo was concerned. In that aspect, one can well understand that during the weeks leading to the release of the book, the entire brouhaha around 'guns' and 'thighs' brew up all over again.

However, scratch the surface and you realize that the book has a lot more to offer than just that. In fact just a couple of chapters, one on how Ramu conned three men - including Nagarjuna - to get his first break as a director, and second on the stage that he set during his college days while taking on a gang of goons, could well give an enterprising writer some of the greatest material to make a film in itself.

Check out the book just for that!