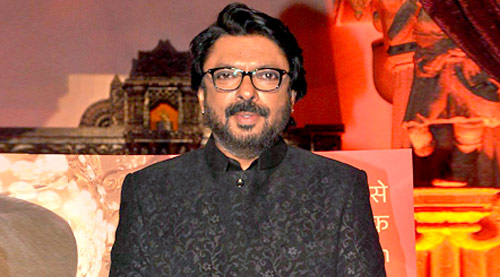 The wah-wahs that his latest film Bajirao Mastani has garnered, comes as a huge relief to this dream merchant of celluloid who

admits he can't think small. The epic scale and vision of his latest film has stunned most. Bhansali is a happy man as he chats with Subhash K Jha

Did you expect this kind of acclaim for Bajirao Mastani?

We knew some kind of magic was happening. As the shooting progressed I realized we were doing something that had the blessings of great filmmakers. So yes,

we did know we were blessed. How blessed, we are discovering now as people are returning repeatedly to see the film. I am told audiences feel they're seeing

something so special after many years. I am honoured.

The era of the plot, tone of the storytelling, and texture of music are all alien to today's audiences. Were you ever apprehensive about the box office

I've lived with the script for 12 long years. Over the years I read it over and over again and continued to be thrilled by it. Every time I read it I

realized Bajirao Mastani must be made. It's so powerful a screenplay. I never considered what the budget would be, or that audiences may not connect

with the classical flavor. There was no fear of failure when I made Bajirao Mastani. I am a fearless filmmaker.

But surely the box office matters when your budget is Rs 140 crores?

Audiences want to see something interesting. It doesn't matter which genre or period it belongs to. It is the conviction with which a filmmaker puts across

his vision which works. But yes, I did make Bajirao Mastani keeping today's audiences in mind. The structuring and the lighting were all done for a

contemporary audience. I was throughout sure of what I was doing. But yes, there was always a nervousness around me, people asking if today's audience

What do you see as the central theme of Bajirao Mastani?

The love story between Bajirao and Mastani. Love is universal and we must love the one that we love without barriers of religion. Bajirao was a fierce

warrior and he defended his land and people with single minded devotion. But when it came to love he was supremely secular. Somewhere in my mind the colours

saffron and green emerged from my plot and merged in my mind.

The colour palate has always been important in your cinema. In Bajirao Mastani you have made explicit use of the colours green and saffron to

denote the merger of the two communities. Was there no fear of offending fundamentalists?

No no, none at all. I feel people believe in love, regardless of the colour of their religion. I feel we co-exist as a community even if there is separatist

violence in places. The way audiences have responded to the Hindu-Muslim love story between Bajirao and Mastani proves I am right. It is such a victory of

secularism. Whatever our religious practice, love has no religion. On the contrary love is a religion of its own.

Was this merger of saffron and green what attracted you to this theme?

Most certainly. Bajirao was one of the most powerful statesmen of India. He believed in protecting and fighting for his land. He won 40 wars. But he lost in

love. 350 years down the line I've paid a tribute to his love story.

The influence of K Asif's Mughal-e-Azam is very strong on your film?

Oh, completely. My film is a tribute to Mughal-e-Azam. The kind of work Asif Saab did, his imagery and visuals, were very inspiring for me. I am

deeply impressed by the works of Mehboob Khan, Raj Kapoor and V Shantaram. I've learnt filmmaking by watching these masters.

But the influence of K Asif is more direct on Bajirao Mastani, in your Aaina Mahal which is Asif's Sheesh Mahal from Mughal-e-Azam?

Mughal-e-Azam. Deep inside me there was the fear â€¦what if people compare me poorly? Luckily for me no one has said I've made a fool of myself. The

It takes guts to go back to the greats and use them in a new avatar in today's cinema?

I've tried, and I think I've succeeded to some extent in Bajirao Mastani. There is still so much to be learnt absorbed and reinvented. The past is

Bajirao Mastani is your third tragic story after Devdas and Goliyon Ki Raslila Ram Leela. Do you think love is complete only when lovers

It's not a conscious decision. But I think love goes beyond the physical presence of the one you love. You may not have the person you love in your life.

But the love continues. Love is uncompromising. You can't say, 'Okay, he or she is not there. So I'll go to someone else.' For me love is when the

heartbeats stop when the lovers are separated.

Your critics think your films are too big?

Big or small I do what comes from my heart. I will make what I enjoy making and what I think audiences enjoy watching.

How did you visualize contemporary urbane actresses like Deepika Padukone and Priyanka Chopra in classic roles?

They are very intelligent actresses and they've a great love for Bollywood's cinematic history. They love the works of Waheedaji, Madhubalaji and Rekhaji.

There was a lot of doubt about Ranveer Singh as Bajirao. Those doubts have now been dispelled?

Who had those doubts? Not me. After we worked together in Ram Leela I knew he was right for Bajirao. It's the director's job to take his actors into

any direction he wishes. Ranveer is a wonderful actor who can be moulded to play anything he wants.

He told me you are his Martin Scorcese and he is your Robert de Niro?

Is he praising me or himself?