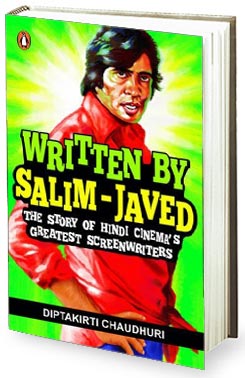 What a fantastic read!

In the world which is cluttered with books dedicated on Bollywood stars and an occasional homage to a director, it is wonderful respite to have someone talk about Salim-Javed, rightly credited as Hindi Cinema's Greatest Screenwriters.

One has to thank the author Diptakirti Chaudhuri for that.

He picks up the writers who are remembered for their timeless affairs, which don't really need to be repeated here as it would be a sacrilege no less to re-introduce something which is so commonly known amongst the lovers of Hindi cinema, especially from the 90s. What is special about this 300 odd page are the countless anecdotes, incidents, flashbacks and moments from the lives of Salim and Javed, who have entertained for over four decades now, and have not yet rested.

The book is the story of their emergence, steep rise, momentary fall, a rise again and then the peaceful stability that have found ever since.

Thankfully, Diptakriti doesn't take a hero worship route in narrating this tale. Moreover, he does very well in making this book a plain and simple account about the scripts written by them, and then just going about bisecting and dissecting them. Instead, he gets to the core of the subject here, the men themselves, and narrates (almost in a Bollywood-isque fashion) about 'jab they met', and the journey before and after that.

No wonder, it is supremely exciting to know how Salim and Javed had chartered a different route at the beginning of their career, only to gain a chance encounter which didn't quite lead to the 'kasme vaade' of any kind but built on organically. What is most interesting in this tie up is the stand that the writers took in doing two things - a) establish the fact in the industry that writers can be the real stars of the show and b) change the grammar of screen writing that was prevalent till then.

To bring home this point, Diptakriti goes through dozens of sources and research material at his disposals through trade magazines, blogs, internet write ups, newspapers and other means, so as to build a story which is cohesive enough to make for a supremely engaging read. So though he doesn't really get an opportunity to personally interview his subjects for the book, he still manages to keep the book interesting enough as if the writers are indeed speaking to the audience through him.

All of that is made possible courtesy the exciting life and times Salim and Javed lived where they made stars out of newcomers, held on to their stand when it came to safeguarding their scripts, made sure that in the marketing and promotion they got equal, if not top, billing, didn't stay away from calling a spade a spade even it meant putting off the bigwigs in the industry, fight it out with the big guns when it came to matters of remuneration and above all, made sure that their confidence spoke the loudest in the films they wrote.

So while it is the factors above that make the book a highly engaging read, unfortunately Diptakriti loses steam around the 70% point when the subject material in his hand dries up. From this point on begin the theoretical write ups where standalone chapters take over and forced references, inferences and conclusions are drawn around thematic trends. Somehow, there is also a good but of repetition that comes in as well and one does start gaining an impression that after holding on to the book's core subject - Salim and Javed - so well, Diptakriti perhaps got a bit carried away in pleasing mass as well as class readers.

That said, just for the first 200 pages of this well written book, I would recommend it as a must-read as never before has such detailed literature (in an entertaining manner) been put together that narrates the life and times of Salim and Javed as the persons and the artists. If you have been a fan of Bollywood cinema from the 70s, this one cannot be missed.