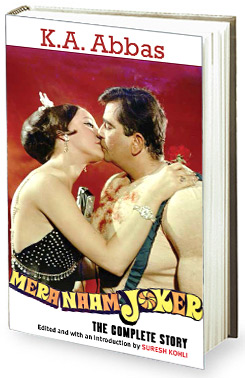 I was quite excited when informed about this book titled 'Mera Naam Joker - The Complete Story' hitting the stands. After all, a film which is hailed as a classic today was a disaster on its release and hence it was always going to be an exciting thing to know the 'complete story' behind what truly happened during its making.

As it turned out though, there was absolutely nothing told about the making of the film in this 300 odd page book. Instead, the complete story here was nothing but the story of Mera Naam Joker while being presented in the novel format, as was written by K.A. Abbas when he had conceptualized the film for Raj Kapoor.

Now that's utterly disappointing as the book could have well served as a golden opportunity to actually know a lot more about what really happened half a century ago when the film first came into being. However, author Suresh Kohli just covers it superficially by only picking up a few passages from the work of other authors and leaving it as a mere 15-16 page introduction that doesn't solve any purpose whatsoever.

That in fact turns out to be a pointless exercise as there is absolutely nothing in there which actually qualifies as breaking news. All that one gets to know is how Raj Kapoor was indulgent enough to shoot endlessly for the film, only to realize very late in the day that Mera Naam Joker had turned out to be a lot more serious than he had envisaged. Well yes, there was an opportunity to dig deeper, but none of that happens here.

This is surprising as well because if at all the publisher/author had wanted to bring back Mera Naam Joker to the readers, there could well have been a serious shot taken at reaching out to Randhir Kapoor, Rishi Kapoor & Rajiv Kapoor and extracting some piece of history from them. Perhaps that was done as well, though rather unsuccessfully. However, if no real digging was done into the subject in question, it seems rather futile to roll a book as the story of Mera Naam Joker in a novel format when the target audience, a limited one in any case, would have rather preferred to catch the four hour long film on DVDs.

Perhaps those behind the book felt that a classic like this had to be preserved in a hard copy format as well. Well, a good thought indeed, but wouldn't it have helped if at least some photographs could have been gathered from the archives? In this case though, all one gets to see are exactly seven stills from the film, which only makes one wonder further if releasing the book in the first place was a good idea at all?