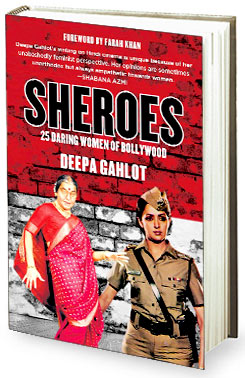 Sheroes - Now this is a term that pretty much came into limelight last year when Priyanka Chopra's Mary Kom hit the screens. The 'She' factor attached to Heroes is enticing enough to know what really is in the offering. That holds true for the films and also the books, especially when noted author Deepa Gahlot is at the helm of affairs. The veteran film journalist has written quite a few interesting pieces over the decades and hence when she comes up with this mini-book of 130 odd pages while celebrating '25 Daring Women of Bollywood', you know that this one has to be checked out pronto.

As it turns out, this one is actually an interesting quick fire read and though added insight into the making of the films being mentioned, the back-story of the leading lady stepping in as the characters and some added trivia would have made it all the more exciting, you do have some engaging moments while flipping over the pages.

The book primarily deals with picking films from the 60s till the year 2010 which had a woman protagonist in a notable part. Call it a female centric film - as is the fad today, or just one of those affairs that had a woman playing a very integral part, these offerings from Bollywood have made news for a right reason over a period of time.

No wonder, the usual suspects from the recent times are Vidya Balan [Ishqiya], Shilpa Shetty [Phir Milenge], Urmila Matondkar [Ek Hasina Thi] and Anushka Sharma [Band Baaja Baaraat]. These films may have met with varied range of success but the fact remains that none of the leading ladies were ignored. Deepa picks up these films, shares a detailed synopsis, elaborates on the part that the female protagonist plays, and then concludes it with the subsequent roles that the leading lady went on to play and then the other films with a women centric subject that released in the same year and made an impression.

From the era gone by, it is interesting to know about Vyjayanthimala's role in Dr Vidya and Rati Agnihotri enacting the role of a 17 year old rape victim in Mujhe Insaaf Chahiye. What particularly caught my attention though was Hema Malini's complex role in Lal Patthar which had Raj Kumar as the male protagonist. Boasting of a fantastic storyline, this film could well be converted into a TV series today and rest assured, it would have quite a long run with a large segment of audience.

Of course, the other actresses that were bound to feature in the book were Waheeda Rehman [Guide], Nutan [Saudagar], Suchitra Sen [Aandhi], Shabana Azmi [Arth], Smita Patil [Mirch Masala] and Meenakshi Seshadri [Damini]. However, the surprise inclusions in the book were Rani Mukherjee [Dil Bole Hadippa], Konkona Sen Sharma [Wake Up Sid] and Rekha [Khoobsurat] amongst others. Ok, so they were good, actually fantastic in these films. Still, in a book that hand picks just 25 actresses/roles/films, some of these names appear as a forced choice.

That said, it is always an author's prerogative on whom to list and in that aspect, it is entirely Deepa's call.

However, one does wonder why Kamal Haasan [Chachi 420] and Hema Malini [Andhaa Kanoon] didn't find a dedicated chapter in the book? After all, it is their pose on the cover of the book that actually made me all excited to pick it up!