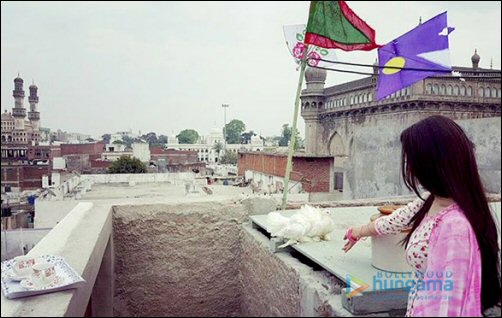 The next year will see a series of biopics, especially those of popular cricketers, and one of them is that of the former Indian

captain Mohammad Azharuddin which will be played by Emraan Hashmi. The actor who was last seen in Hamari Adhuri Kahani was recently in Hyderabad

shooting for the film Azhar along with co-star Prachi Desai.

Recently, Prachi Desai took to social networking sites to give a glimpse of her look in the film. Prachi, who portrays the role of Azharuddin's first wife

all I can reveal from her look".

While the actress wanted to keep it all a secret, one of the enthusiastic fans who was overwhelmed to see the two stars shooting for the film, seems to have

made this picture viral on the web. The picture has Emraan Hashmi and Prachi Desai in the 90s look shooting for the romantic track on the terrace.


Azhar, directed by Tony D'Souza, also stars Nargis Fakhri as the cricketer's second wife and former actress Sangeeta Bijlani along with others like