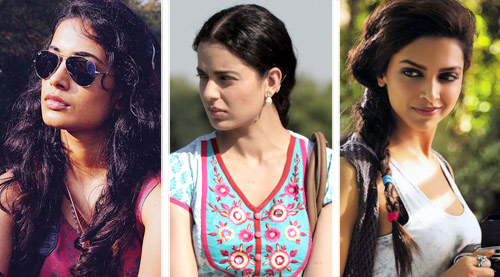 This week's much-talked-about film, Pan Nalin's Angry Indian Goddesses is not the first Indian film about female bonding. Here's listing the 10 that tried it


1. Mandi (1983): When the redoubtable Shyam Benegal brings together a gallery of gorgeous women to play happy prostitutes it's time to rejoice. Mandi is one of Indian cinema's

most accomplished films about female bonding with Shabana Azmi, fat and flamboyant as the Madame, and Smita Patil, Neena Gupta, Aneeta Kanwar and Sreela Mazumdar excelling as the happy whores.

Interestingly for a film about female heroes the male characters were well fleshed-out too.


2. Queen (2013): Blatantly lifted from Parvathi Balagopalan's little-known film Phir Zindagi about a girl who takes off on a solo honeymoon when ditched by her husband-to-be,


3. Kamla (1984): Jagmohan Mundhra's dark and desperate film about the relationship between a woman who is 'sold' to a journalist and the journalist's wife. Memorable mainly for the

bonding between Deepti Naval and Shabana Azmi who played the two powerful women characters who discover a lot in common.


4. Paisa Wasool (2004): Directed by Shrinivas Bhashyam this is a little-seen film about a struggling actress and a divorce. Sushmita Sen and Manisha Koirala shared a crackling


5. Cocktail (2014): This film was not really about Saif Ali Khan and Deepika Padukone. But about Deepika and Diana Penty, one smart sassy urbane the other conservative and repressed.

Director Homi Adjania should've just kept Saif out of the picture. But oops, Saif was the producer.


7. Fire (1996): Deepa Mehta's film showed the two lonely daughters-in-law of a small time business family turning to lesbians. A bit of a stretch, really. Sexual orientation is not

dictated by social-cultural circumstances. But Shabana Azmi and Nandita Das were brilliant together.

Sen's direction made this film a hodgepodge of feminism rant and filmy melodrama. Very disappointing.

terrific ensemble cast of female actors is the saving grace.


10. Angry Indian Goddesses (2015): What happens when a bunch of women from different cultural backgrounds meet in Goa? Pan Nalin's inviting film features an interesting cast of

The result is ....explosive!